One of my shortest stays back home has come to an end, and it was time to head back to my second home. As it will only be my second time on the A350 and the very first on Malaysia Airlines’, I was excited and was looking forward to check out the newest products on MH and experience Malaysian Hospitality yet again after a pleasant journey from London back to KL which I wrote about here. On the day of departure, I had to get out of bed earlier than usual for the 9.00am departure with the aim of being at KLIA about 2.5 hours before departure given previous experiences where the baggage drop counters for MH can get ridiculously busy.

First stop upon arriving at KLIA was the self check in kiosks for MH which are conveniently located just in front of the check in counters. Despite the kiosks being not too occupied, there were issues with some of them being not responsive hence slowing down the process and I was only able to get my boarding pass and luggage tag printed only after trying from an alternative kiosk.

An interesting thing happened when online check in was done before my flight, where I was delighted to find out that I was only allowed to select seats from the Economy+ rows despite a dummy booking revealed there were still empty seats available in standard Economy. Not too sure why is that the case but cheers to extra legroom with no additional costs! 🙂

Thankfully, the baggage drop counters were not as busy as I expected that morning and the queue moved rather swiftly.

Hoping that my equipment of the day will be the one in special livery just like the advert above, taken at the area before immigration clearance.

Before heading to the boarding gate, I went to the Plaza Premium Lounge at the Satellite Terminal for some breakfast and a warm shower in which you can read about the review here.

My aircraft for the day was already at the gate in preparation for boarding when I arrived. Sadly it wasn’t the one in special livery which I was hoping for. On a side note, is it just me or the ”zorro mask” of the A350 is pretty sexy?

Boarding commenced shortly after. Note that WiFi is available onboard, which is a first on MH (only available on the A350s).

Passing through the Business Class cabin before arriving at my seat. MH has a 4 class cabin on their A350s along with First, Economy+ and Economy Class. 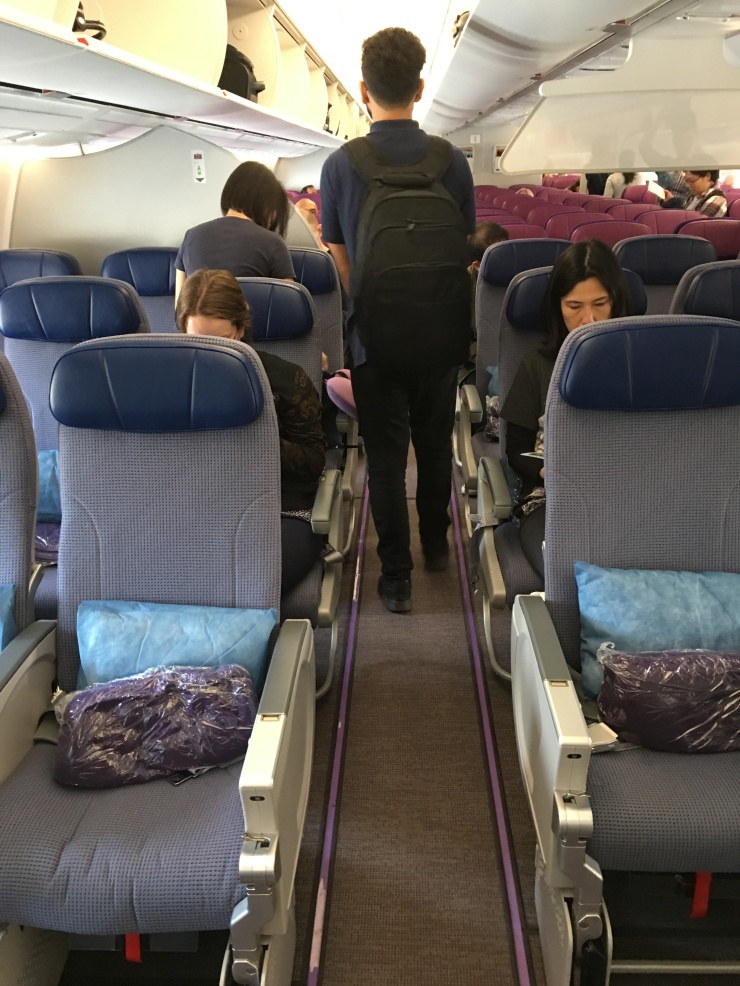 Grateful to be seated in this exclusive Economy+ row, selected the bulkhead row with the best legroom amongst the 3 rows offered in Y+ (differentiated by its seat colours to standard Y).

Aisle seats are always my choice when I am travelling solo on a long haul. The seat on the right being my selected seat on this flight.

Shot taken from the window seat before the actual occupier arrived. Love the curved sharklets on the A350s.

Very happy for this legroom on a 13 hours+ flight without paying extra. 😛

An obligatory pit stop at the W.C to see what’s different. Not much to shout about besides the fact that it looked sparkling clean given the age of the aircraft.

Time to head back to my bulkhead seat after that, not quite used to facing a wall for the entire duration of a flight. Nevertheless, it was not much of an issue given the very generous legroom available which is very much appreciated on a long haul. 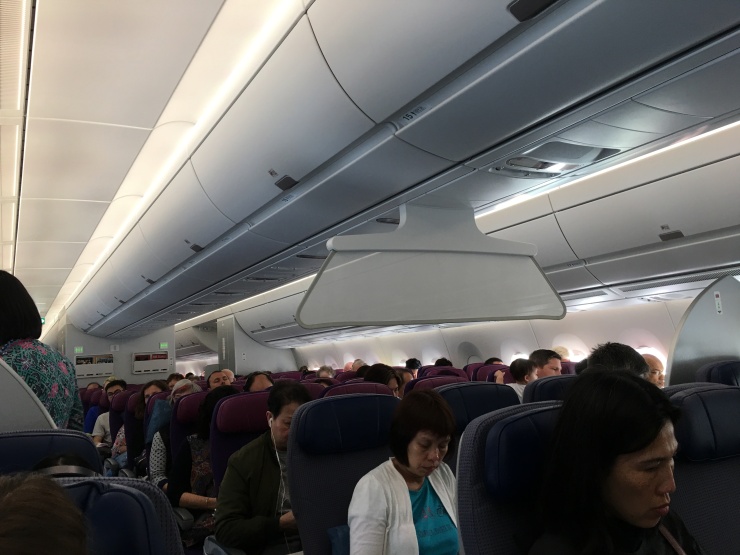 Only a smaller divider between Y and Y+ seats as noted above.

Magazine racks are available at the front of the Economy+ Class cabin but as you can see the selections can be rather limited. Not too sure if the rest were taken by passengers during the boarding process or these are actually what is on offer.

Looking into the Business Class cabin onboard which was not full that morning, with a crew using one of the seats to do some paperwork before lift off. 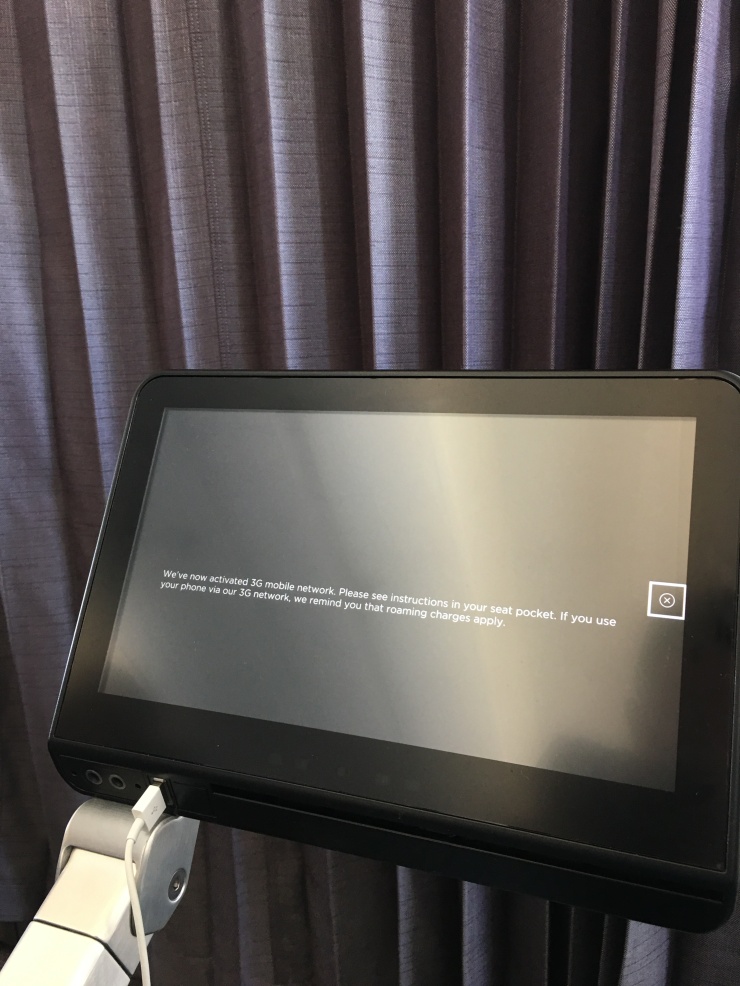 The curtains were drawn after take off and it wasn’t a smooth start to the flight with the Inflight Supervisor coming through the PA informing us about some issues rebooting the IFE system to bring it back live. Thankfully, Wifi and 3G were activated and I was able to spend some time to explore this feature whilst waiting for the IFE to get back into action.

Bulkhead pocket content shot. Note the additional leaflet with information on how to get connected to the internet.

The different price range offered depending on your intended usage.

I decided to try out the 3G network connection and was pleasantly surprised that the internet speed was rather quick. Tracked myself after initial connection and it definitely felt a little weird doing that whilst flying. 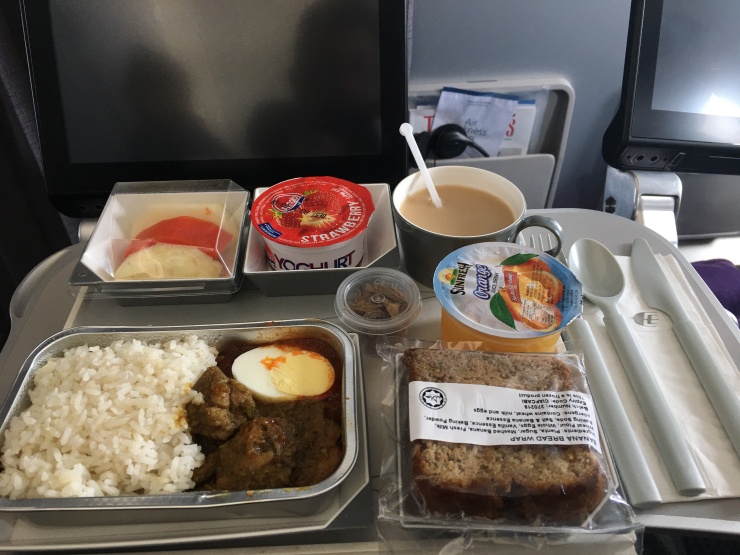 About an hour after take off, the first meal was served and I went for the Nasi Lemak offered without hesitation. It was very good and satisfying given that the one I had ex-LHR was very disappointing especially in terms of portion. Glad to be able to have my final NL fix in the air before arriving in the UK.

Even after meal service ended, approximately 2 hours after take off, there is still no sign that the IFE will be back live. At that point I was telling myself that this might be the longest flight in which I have survive without any IFE. Picture above was taken as I visited the loo after breakfast was cleared, note the completely black screens all across, one might wonder if this was actually a flight on a low cost airline?! 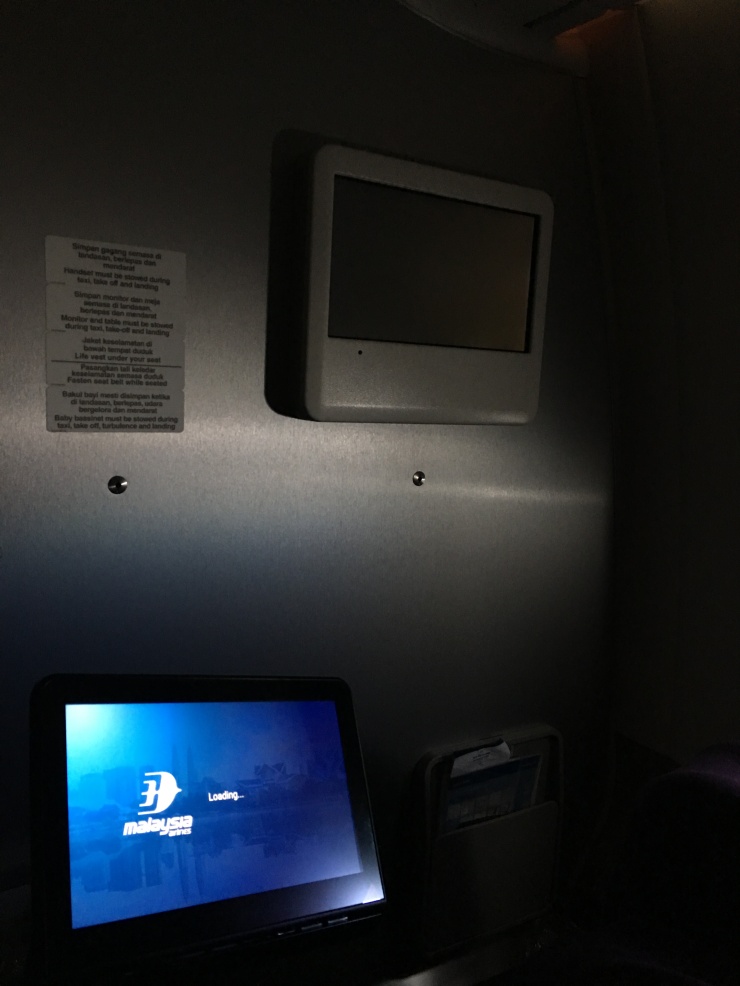 The rather pessimistic (not the usual :P) me have been proven wrong approximately 3 hours into the flight when the dark cabin was lighted with blue rays as the IFE screen lighted up as the system got rebooted successfully. Never felt so relieved on a flight, surviving another 10 hours of flight without IFE felt pretty unimaginable at that point.

Some light snacks were offered around 5-6 hours into the flight, which consisted of a small Beryl’s chocolate along with another small sandwich. I was rather disappointed with the portion given that the LHR-KUL route offered a slightly substantial snack compared to this.

Given the light snack served which wasn’t enough to last me through the 2nd meal, I asked for a cup of Milo somewhere over Pakistan after getting to know it was actually available onboard after hearing another passenger getting one. 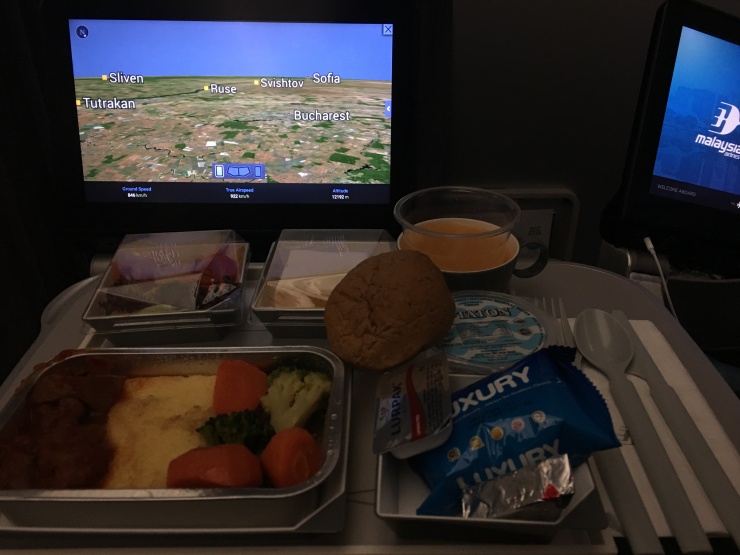 The second meal was served about 3 hours before landing and I had to settle with the beef frittata option as the Asian option ran out as the service began from the back this time round to make it fair for all passengers after the first one being from the front. Good meal overall with decent portion.

London was already in sight after meal service completed, which meant that it was time for me to stow my IFE screen in preparation for landing. 😦

Arrived at BA’s home base moments after and it was time to face reality…end of holidays and back to work. 😦

Final peek at the A350XWB of MH after disembarking.

It was one of the rare days at the UK Border having cleared immigration just 20 minutes after arrival, and I managed to beat my luggage by arriving at the baggage reclaim belt first!

After having a pleasant experience on my outbound flight from London back home, I was looking forward to this inbound flight back to London and despite some slips noted during the flight, it was generally another great flight on MH. The hard product which is the latest offering of MH is very comfortable, and I really appreciated the fact that I got to experience Y+, and would recommend it for the additional legroom especially on a long haul. The hiccup on the IFE system can be improved if it happens rather frequently but it might just be me being unlucky on this flight, nevertheless the latest IFE system on MH is responsive and offered a decent selection of video/music on demand. The Wifi/3G offered onboard the A350s is definitely a plus and a commended differentiating factor from its competitors. Food wise the catering ex-KUL was delicious with the only downside being the portion of the snack between meals which was disappointing. With only a couple of empty seats in Economy in an otherwise full cabin, the cabin crew onboard remained friendly yet professional and portrayed the best of Malaysian Hospitality. As mentioned in my previous trip report, if my experiences are consistent throughout the MH brand, I am optimistic that MAS would be able to regain it’s World Best Cabin Crew title in the near future!