O V E R V I E W :
After exactly 333 days on the ground due to the COVID-19 pandemic which saw subsequent waves in Malaysia thus movement control restrictions being reintroduced, I was “lucky” to get the chance to fly domestically due to work requirements, which also marked my very first flight of 2021. It was also a notable flight on a turboprop flying out of KL’s city airport – Subang Airport (SZB) as my last flight from here was many many years ago. This time round, I flew up north to Penang and no prizes for guessing it right, it will be on Firefly Airlines which is the sister company of the national carrier – Malaysia Airlines.

Fast forward to the day of departure after securing my police travel permit which is mandatory for essential travel (ie: due to medical / work reasons etc.) during this Movement Control Order (MCO) in Malaysia, I arrived at SZB after a short grab journey from home. Due to reduced flight schedules to Penang from KL by all the operating carriers, I was booked on Firefly which operates 2x daily to PEN from SZB during the MCO. 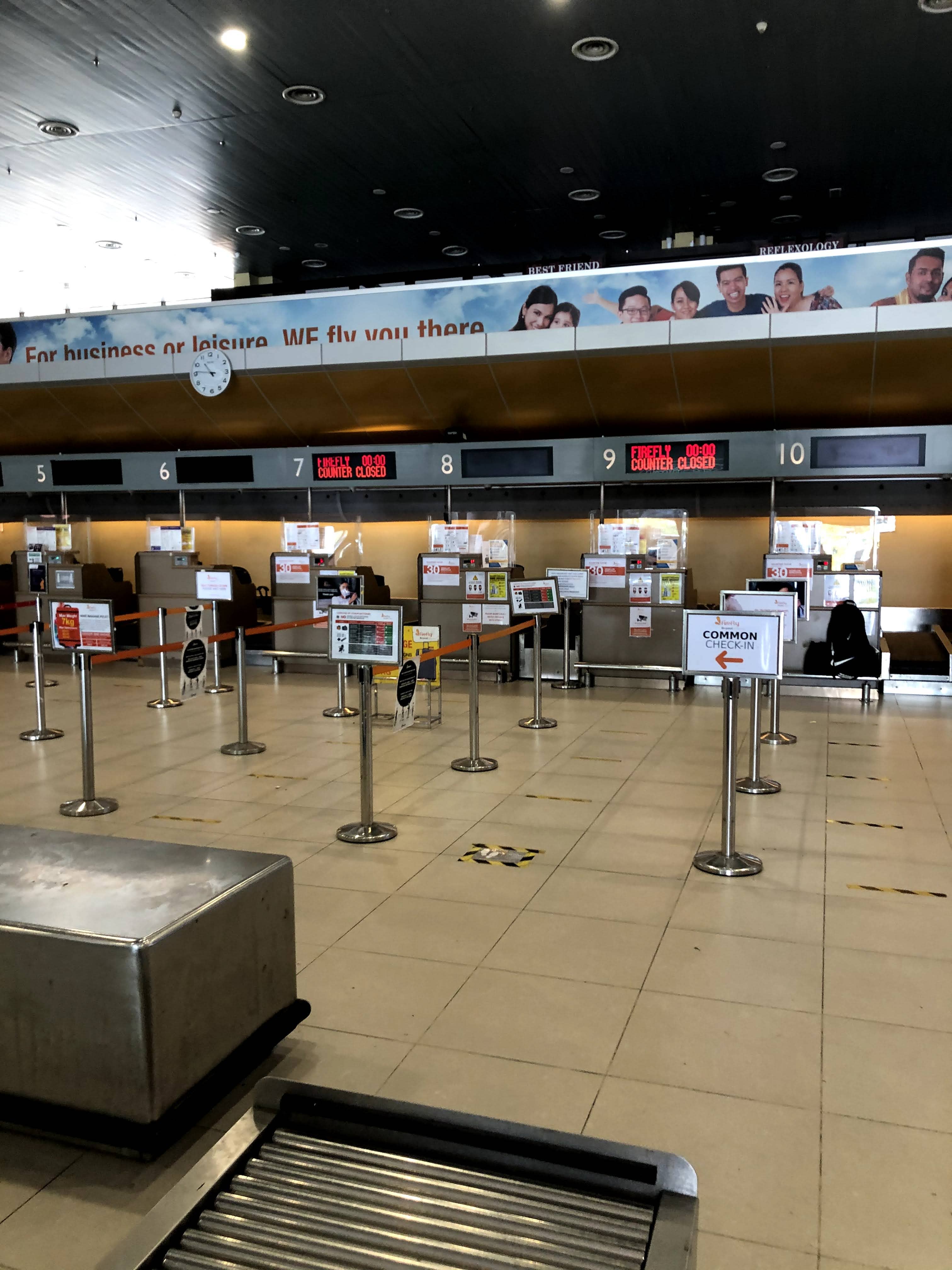 The sole entrance to the terminal building was guarded by a police officer on duty, who inspected my travel police permit and supporting documents before allowing me to proceed with temperature scanning and subsequently enter the terminal. 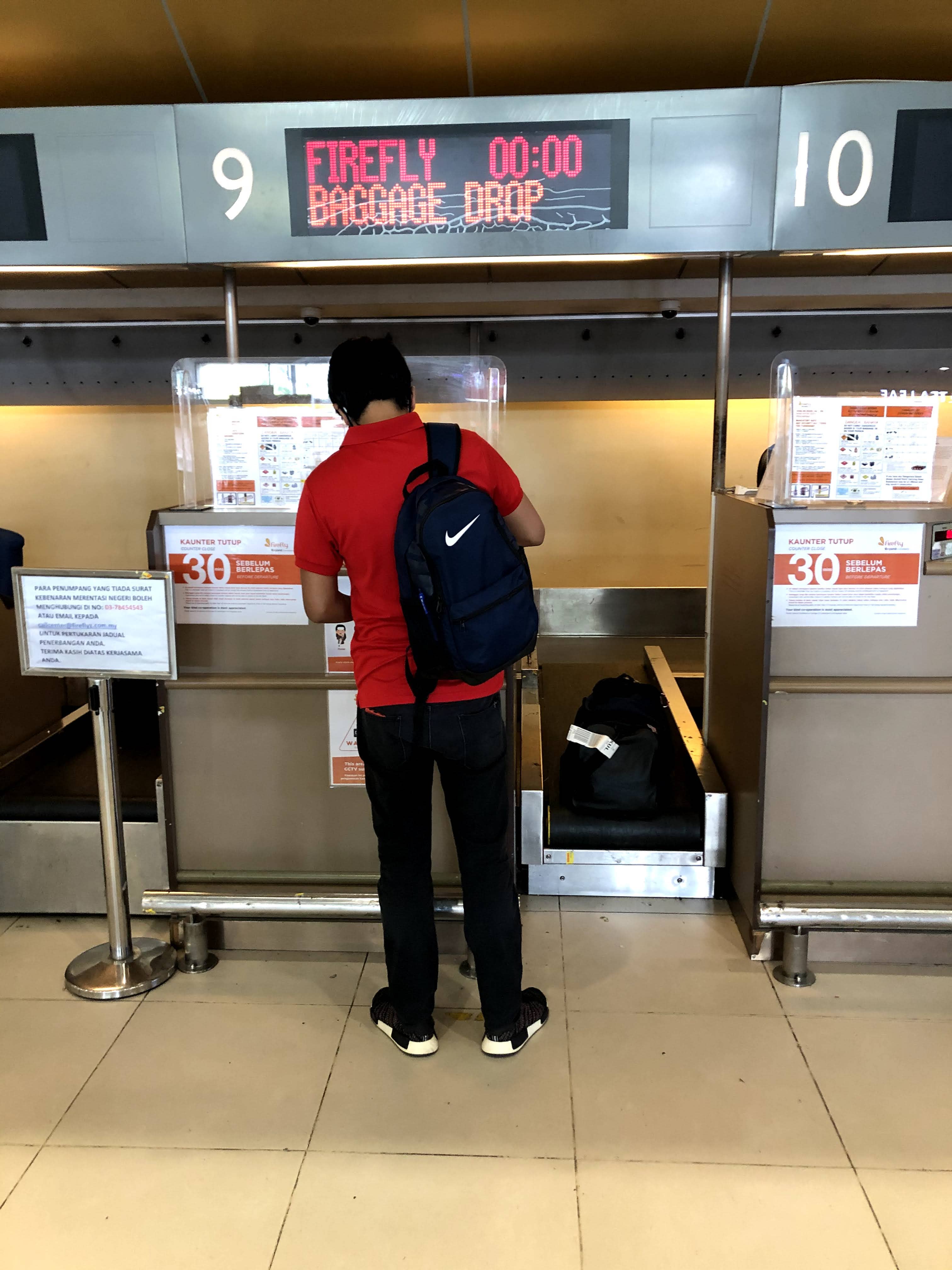 Shortly after entering the terminal, the check in counters opened and I was second in line to check in for my flight and drop off my baggage. As with the new normal of travel at most if not all airports these days, clear social distancing markers were in place for the queue lanes at the check in counters along with sneeze guards at the counters.

The check in process was a breeze and I was handed my “receipt like” 😦 boarding pass and got my baggage checked in. As I was early at the airport and had some time to spare before boarding, I went to the observation area located at the upper floor for some plane spotting.

Not the best view of SZB from this area and only a couple of FY’s ATR spotted at this otherwise empty airport. Shortly after, I made my way to the boarding lounge.

Interestingly, there were still quite a number of domestic flights being operated from SZB within Peninsular Malaysia as per the FIDS, though it would be interesting to know what are the actual load factors for these flights. 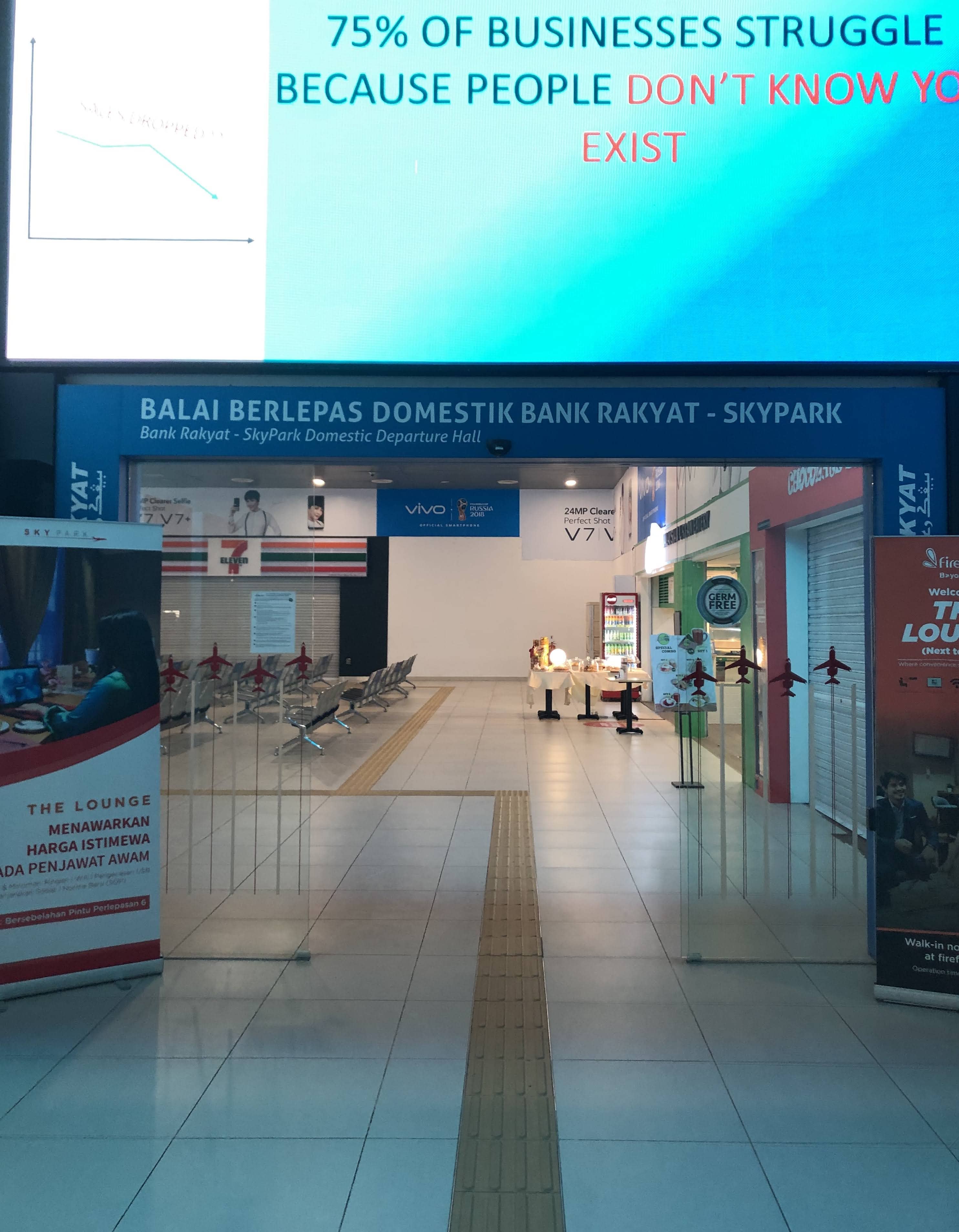 Upon clearing security, I arrived at the general holding lounge for all domestic flights departing from this airport.

It was pretty empty with the expected load for the departing flights to be quite low. 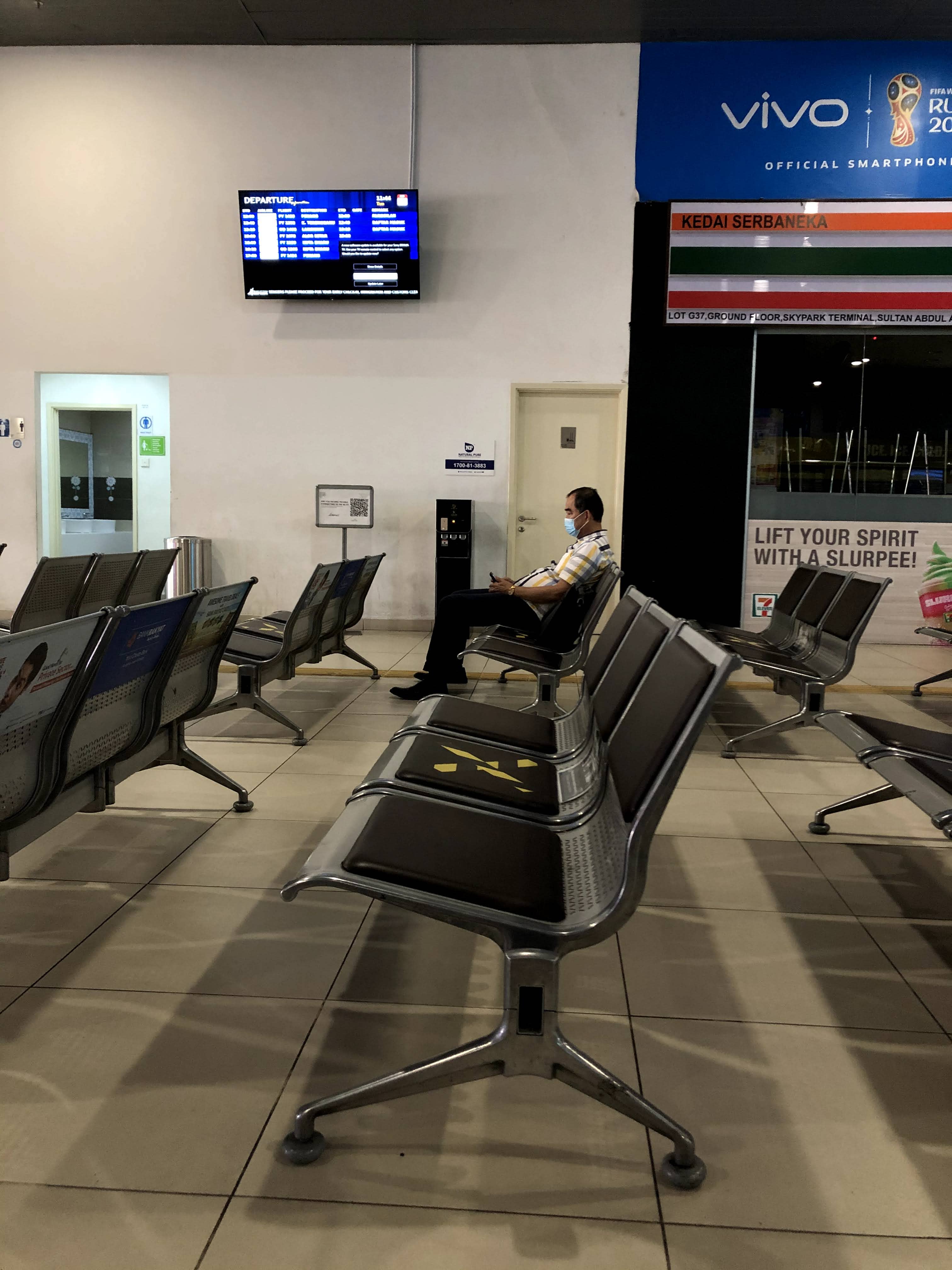 On the bright side, I was glad to spot a water dispenser being available in this holding lounge, which comes really handy for travelers (especially these days when most restaurants / convenience stores at airports are not operating due to the lack of business).

At about T-20 minutes prior to departure, boarding was called according to seating zones and I was directed to my aircraft of the day (9M-FYC) which was located on the other side of the terminal building after a short walk.

It felt great walking towards the turboprop which I have not flown for many years now! 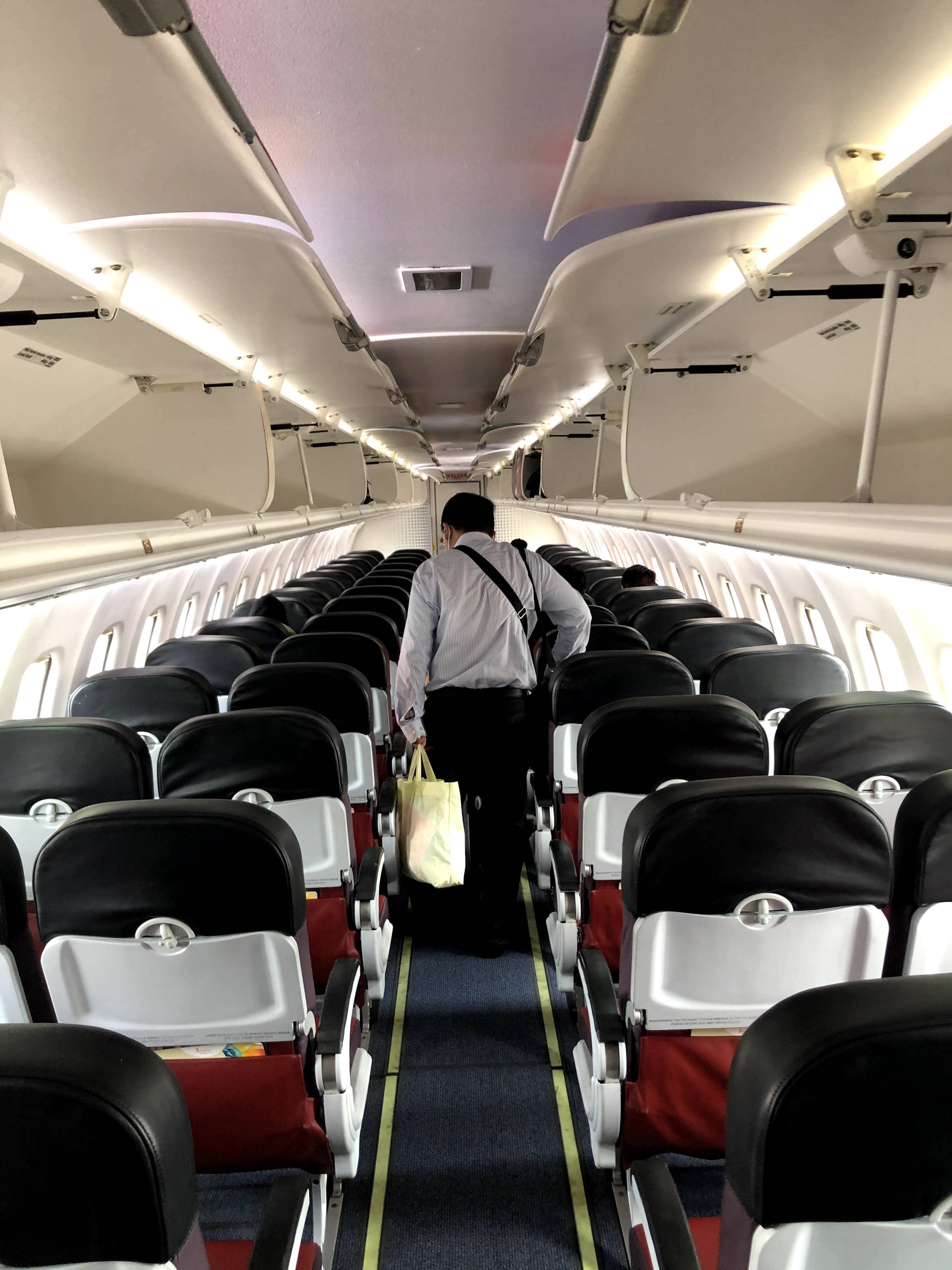 Cabin shot from the back of the aircraft upon boarding this ATR 72-500.

Boarding was completed pretty swiftly due to the low load and push back was done on time at 12pm sharp!

The load factor was close to 30% for this flight which accommodates 72 passengers at its maximum capacity.

Seat pocket contents with no inflight magazine in sight.

Mandatory leg room shot, pretty tight for my almost 6 ft. height but still bearable for this short flight just under an hour.

After take off, we made a sharp right turn and I was rewarded with this amazing view of SZB at a distance on this sunny afternoon. 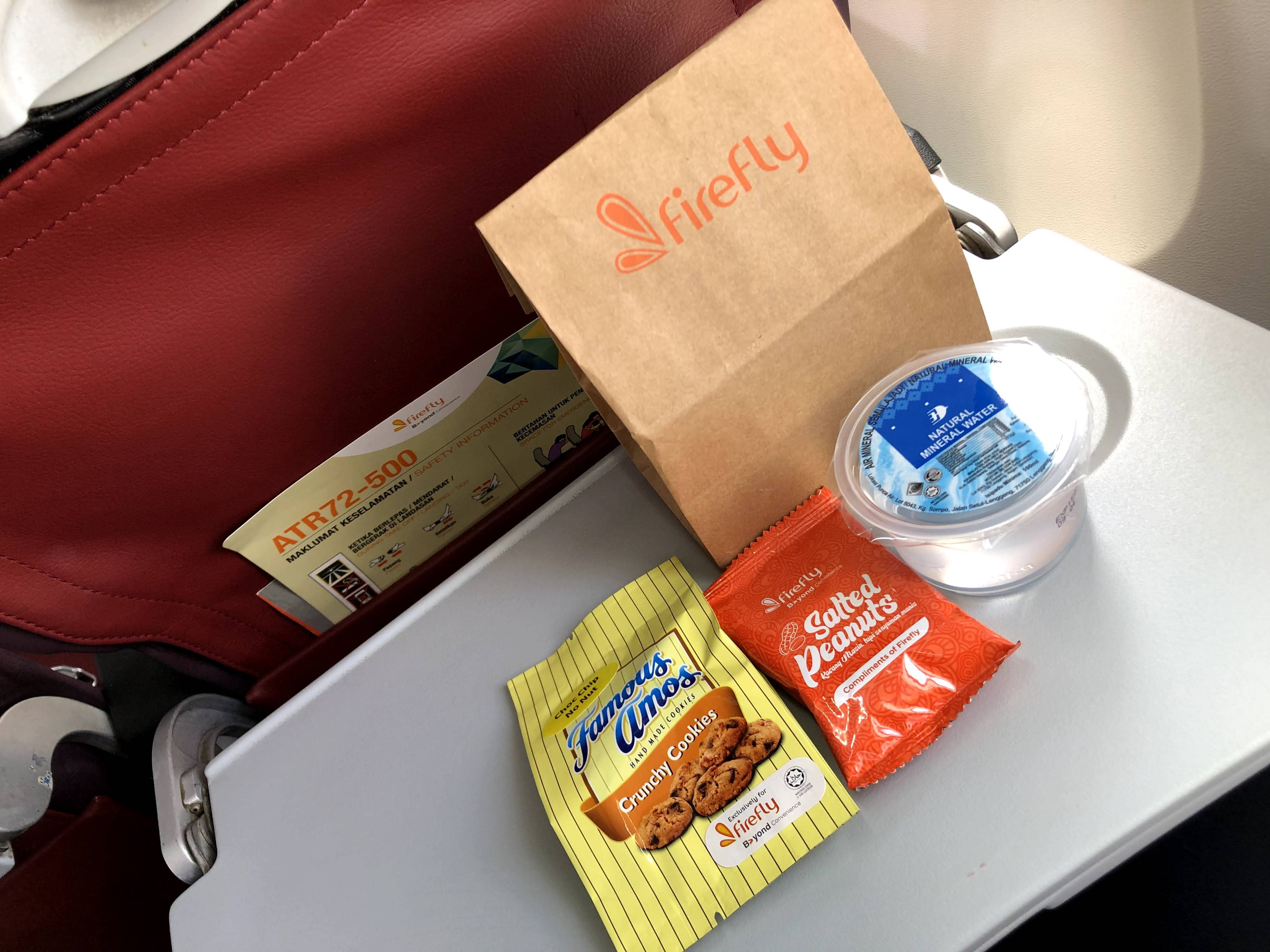 About 10 minutes after departure, a refreshed snack package was handed out to all passengers. The brown Firefly branded package consists of 1x Famous Amos cookie (truly appreciated the nut free labelling), 1x packet of salted peanuts and a 90-100(?) ml water. This is a revised product offering by Firefly and probably a response to the COVID-19 pandemic to reduce contact between crew and passengers in comparison to previous experiences of receiving the snacks and beverages on separate rounds of service. 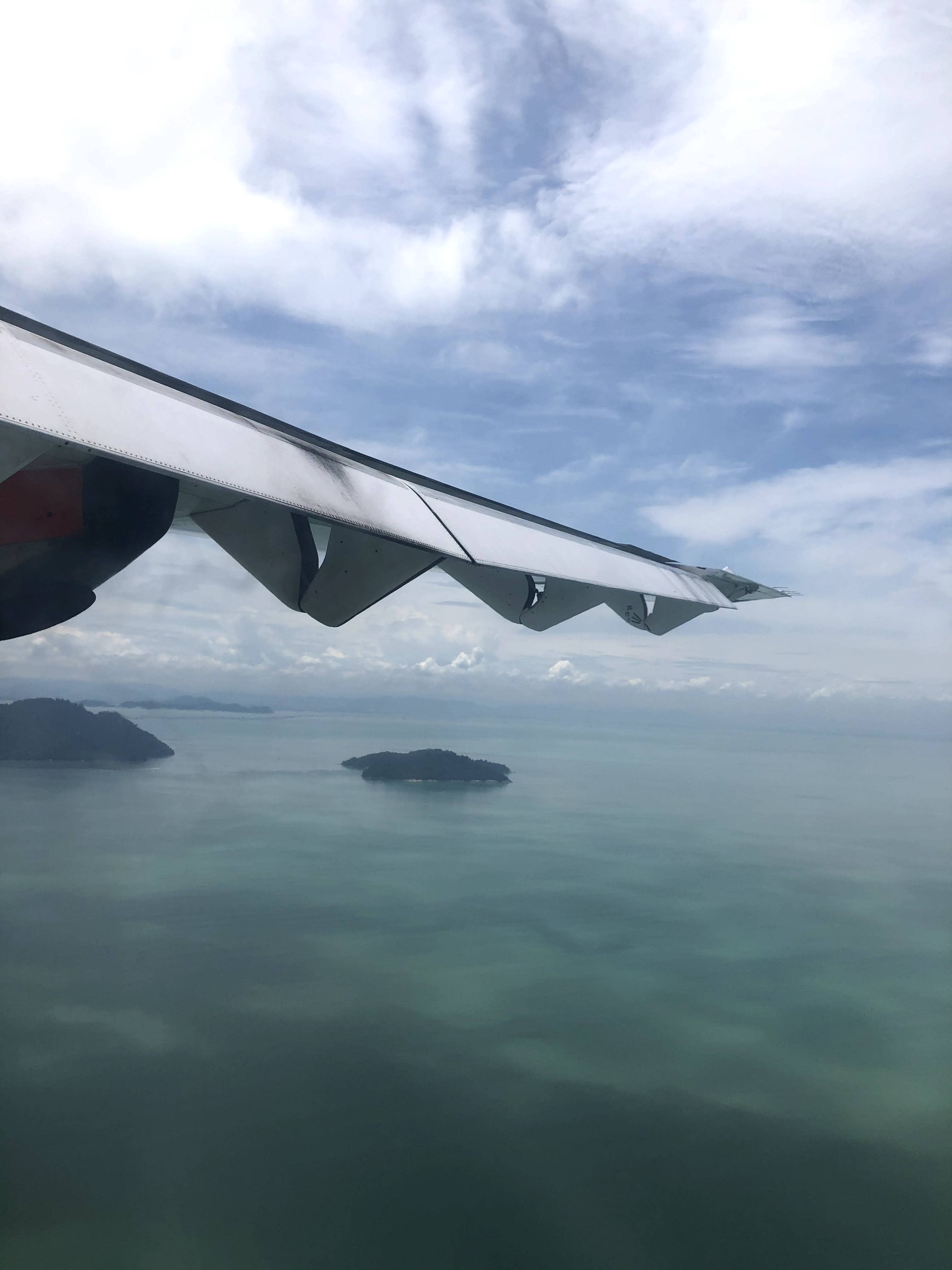 Subsequent to the collection of trash after meal service by the cabin crew, they also went down the aisle for the sale of merchandises but the take up rate was pretty much nil for my flight. In a blink of an eye and after cruising at 14000 ft. for about 30 minutes since departure, we were already descending into Penang International Airport.

Soon after, we touched down at PEN approximately 10 minutes prior to the STA at 12.50pm. 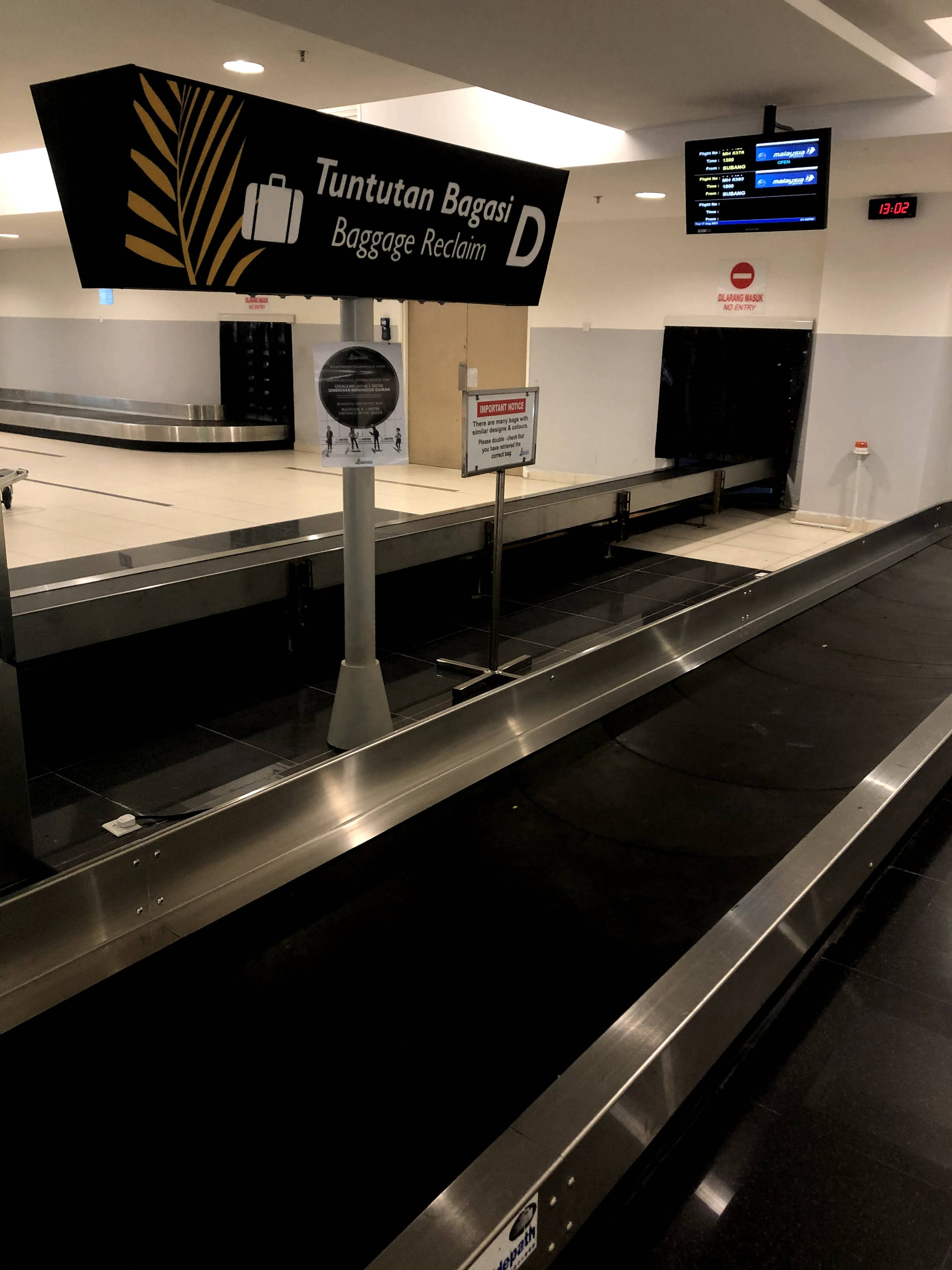 Disembarkation process was really quick with no aerobridge involved for the ATR and I got off the aircraft in no time and a few minutes later I found myself waiting for my baggage to arrive at the carousel.

Overall, it was a smooth journey from Subang all the way to Penang and I truly enjoyed the convenience of flying from the city airport as it saves all the hassle and time in contrast to a departure from KLIA (well, dependent on where you live of course). While it was a sad sight to see the really low load factor on the flight due to the MCO in Malaysia, it was relieving to know that Firefly has kept in mind the need for essential travel and maintained some of its schedule to “serve the nation”. The ground staff and cabin crew throughout my journey showed warmth and were really friendly despite the tough times in the industry, portraying the famed “Malaysian Hospitality” being a part of the Malaysia Aviation Group. Besides that, the refreshed product offering onboard in relation to F&B is commendable given the convenience it provides to passengers who wish to take away rather than dining on board but on the side note I do miss the soya milk drink that was available last time. Personally, being someone with nut allergy, I am glad that I still have something to bite on rather than just being served peanuts and this is really appreciated. Firefly Airlines promises and had delivered beyond convenience and given the value it offers flying out and into SZB along with the other benefits including complimentary baggage allowance besides refreshments, it is definitely worth considering booking with them despite the slight premium on the ticket price and I look forward to flying with them again in the near future!