O V E R V I E W :
This flight is the second part of my flight back to the UK from Santorini (Thira), the report for the first part (JTR-ATH) can be viewed here. Having arrived at Athens just over an hour past midnight, I had about 6 hours before the flight back to London departs. Having experienced spending the night at the airport during my initial flight into Athens from Birmingham as it arrived around 4am, my friends and I decided to head back to the same spot which we occupied about a week ago. Unfortunately, the seats near to the arrivals exit were not as comfortable as it had seat separators which did not serve what would otherwise be an ideal lie-flat bed. Thus, sleeping on the floor with maps as mats was my eventual decision. After a rather uncomfortable endeavor for a couple of hours, it was time to head to the boarding gate after a document check! 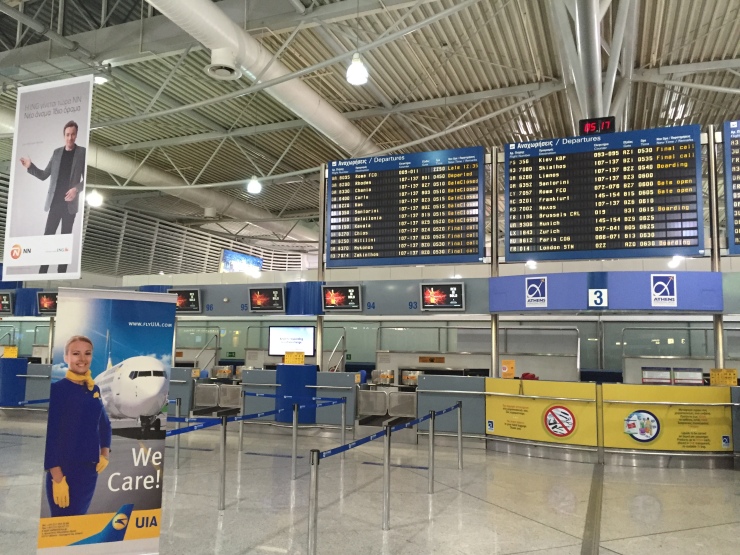 Departures area at Athens with the empty UIA check in counters. It was 0517 to be exact when this was taken!

Only one desk was assigned for my flight to London STN, of the many different flights offered by FR from Athens as noted from the screens. 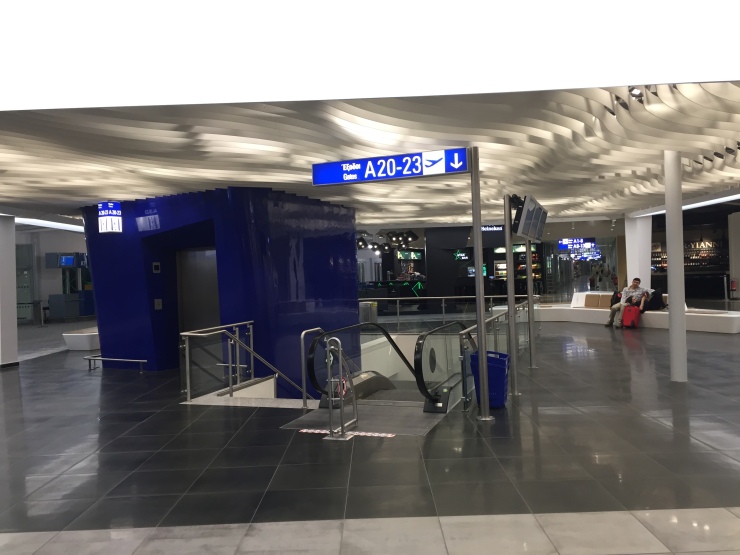 Cleared immigration in no time and was heading to my departure gate at A20. Still a rather quiet airport at this time of the day.

Looks like it is going to be a full flight today. Long queue at the gate.

A panorama of this B738 with a beautiful sunrise background.

On my way finally!

My new seat at 16A, em-ex row. As no one was occupying this row, one of the FA came over my row and asked if anyone would like to swap and of course I said yes! 🙂 Very lucky indeed as I get to enjoy a generous legroom without a fee, which is contrary on a LCC especially.

You can compare the legroom I had initially on my original seat of 15A.

A candid shot of the yellow dominant interior on FR.

As it was a longer flight (about 4 hours), I decided to get something light as I couldn’t wait until I land at London to get food. Euro 2.50 for this butter croissant.

One interesting fact about FR flights is that a magazine will be given out during boarding stages of the flight that includes the in-flight menu as they do not have seat pockets to store these which can be rather bothersome in my opinion.

Having not slept properly for the entire night, I was glad that the flight was coming to an end with this final approach with some lovely view.

However, after we landed, there was a shocking long queue at the bridge leading to the immigration area but thankfully it was cleared not too long after.

Again, a generally comfortable flight on board this popular LCC in Europe and no complains for this sector, except that the non-existent seat pocket can be a pain at times. Not all the cabin crew were as friendly or cheerful as they should be as mentioned in my previous report on my first sector with FR. Better service and product offerings should be able to propel FR to be in the same league as Skytrax’s World’s Best Low-Cost Airlines, well if they are interested on that. 😛