Whether it is flying for leisure or business, why not be a smart flyer and bear in mind these 3 tips before booking your next flight?!

After deciding on your intended destination, be sure to check a broad range of dates if you have the flexibility. One platform that I have always used for my flights research is Google Flights, which might not be well-known to most people.

It has an interesting explore destinations feature for those who have not firmed their plans and are open to the cheapest destination for their dates of choice.

Click on explore destinations and you will be able to see fares for the various destinations for your intended dates and from your selected point of departure.

If you are pretty cost sensitive, make use of the one-way search function and look for separate one way bookings for your intended itinerary instead of making a return trip booking. While this is pretty rare, you may get lucky with the 2 one way tickets being cheaper than a return ticket, and it will only cost you a slight inconvenience of making 2 separate bookings.

Taking the above a step further, for those who do not mind a longer travel time for a cheaper ticket can explore departing from / arriving at a neighboring city or country from your original plan and look for a second booking to bring you to / from that neighboring “transit” point to your final destination. Again whilst chances are rare, you might secure a better deal even after totaling the 2 bookings! An example would be my personal experience flying to Kuala Lumpur from London (one way trip), where 2 separate bookings of (i) London to Singapore and (ii) Singapore to Kuala Lumpur being actually cheaper by close to 10% compared to a single booking (irrespective of transits involved) from London to KL.

Do take note before making bookings on budget airlines and check the real cost of your ticket by looking out for the hidden extras. Provided that you are comfortable with excluding the extras (Eg: meal or check in baggage etc.), occasionally it might be worth considering getting a ticket on a full service carrier instead for a better in-flight experience as the all-in fare may come up lower than a budget airline with the costs of the extras factored in.  *Note that some full service carriers are somewhat hybrid these days by offering add-ons with additional charges as well*

Also, be aware of the airport that your flight will be arriving at. Secondary airports within larger cities may be further away from the city centre and are favoured by budget airlines due to the lower airport charges but a smart flyer will factor in transport costs to/from that airport in comparison to the primary airport used by most full service carriers before making their decision.

Certain airlines have different fare buckets for a particular class of seat, for example Malaysia Airlines offer 3 family class (namely Lite, Basic and Flex for applicable routes) within Economy which comes with different offerings. A smart flyer would take note of the specific benefits that are attached to their fare of choice (as illustrated from the extract below) before making their decision. Do note that a number of full service airlines are going down the route of offering cheaper Economy class tickets without any check in luggage hence an awareness of your ultimate fare selection would be important otherwise you will risk being surprised at the check in desk to pay for this add-on. 😛

A smart flyer will be aware of the 3 main airline alliances that are present, namely Oneworld, Star Alliance and also Skyteam.

Airline alliances are formed when different airlines agree to substantially cooperate with each other. The advantages for customers include more destinations and more convenient connections, while the airlines benefit by feeding passengers to each other instead of to competitors.

By recognizing the airlines within an alliance, a smart flyer will be able to collect frequent flyer miles even when flying on a partner airline within an alliance. For example a passenger flying Malaysia Airlines can claim mileage for another OneWorld airline such as British Airways. Additionally, status levels that you have on one airline are generally recognized by other airlines in the same alliance.

A smart flyer would thus join a loyalty programme in an alliance and try to fly as much as possible on airlines within that alliance or join a loyalty programme in each of the 3 alliances so that you are not restricted to flying on airlines within 1 particular alliance. This would ensure that he or she will be rewarded with every flight taken and be one step closer to redeeming a free flight, securing a free upgrade or simply having lounge access for being a status holder within an alliance.

However, not every single airline in the world is part of an alliance. Certain airlines have bilateral partnerships with another airline when it comes to earning points that might not be between airlines within the same alliance, and this should be identifiable when booking is made through a particular airlines’ website (when selecting a frequent flyer program to accrue the points). *Note that most budget airlines are not part of any alliance but they might have own loyalty program hence joining them as well ensures that you will not be missing out on the advantages of earning the points*

Some might argue that there is no point in joining a loyalty programme if he/she does not fly frequently, but a smart flyer would know that there are other methods of earning frequent flyer points besides going on a flight (Eg: Hotel bookings or online shopping for British Airways’ Executive Club – frequent flyer programme of BA) and it does not cost to sign up to be part of an airlines’ loyalty programme. That said, it is vital for a smart flyer to stay on top of the expiry dates of any points earned and spend them before they get expired.

Another aspect that will be considered by a smart flyer would be taking note of the operating aircraft on a particular flight as indicated during the booking process. By identifying and being aware of the aircraft type, it will be be helpful when deciding either to fly Airline A which will operate the same flight on a wide body aircraft (thus likely to come with better comfort ie: legroom) versus Airline B which will operate a narrow body aircraft.

Before hitting that ”Pay now” button, a smart flyer would take into consideration the method of purchasing the flight ticket. Using a credit card might incur additional charges but if the total spend is big, the additional charges might be negligible when factoring in the points that can be earned through that specific credit card. *Note this will depend on the fees (%) that is charged for credit card purchase by a particular airline and also the corresponding points that will be earned for every dollar spent as per that credit card provider*

On a side note, for bookings made through a travel agency, any subsequent change of travel plans or refunds would have to be requested from the respective travel agency instead of dealing with the airline directly as the booking may have differing terms and conditions being issued by the travel agent.

Once booking is made, a smart flyer would also scout the best seat to choose from based on his/her preference (aisle or window) for a particular flight if seat selection is available either then or when performing online check in, and this will be done via seatguru.com after identifying the aircraft type that will be operated on his/her flight. 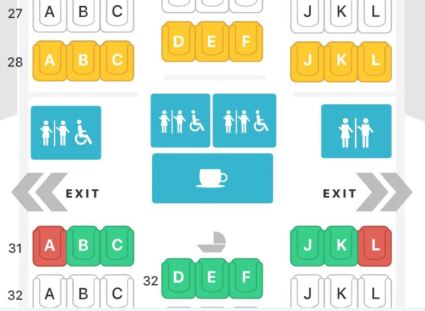 Lastly, a smart flyer will consider opting for special meals (Eg: seafood/vegetarian meal etc.) served on his/her flight (if available) as he/she knows that the food will arrive ahead of the rest of the passengers who have not requested for a special meal.

Kudos on reading this far and I hope you will find these pointers useful!