3 days went by in a blink of an eye, my trip to Paris has come to an end. What was originally a 4D 3N getaway became a 3D 3N as my outbound flight from London has been cancelled due to the foggy weather and I was re-booked on a later flight which only arrived at night on my first day in Paris. For more juice relating to this, please visit this link to read about my virgin flight cancellation. As you might have noticed, this will be my very time flying on a New Year’s eve, feeling excited to welcome 2017 to add on to my very first flight on Air France, my journey to the airport (CDG) began at the Gare Du Nord.

My friend and I got our train tickets from the self service machine and headed to the platform to board the train direct to CDG Airport, which has stops at different terminals.

Some lovely scenery en-route to the airport featuring a lovely french lady. It did not snow in the city but it seemed like it did in the outskirts close to the airport. As my friend was travelling on a different flight from Terminal 3, we bid goodbye when the train stopped at Terminal 3. 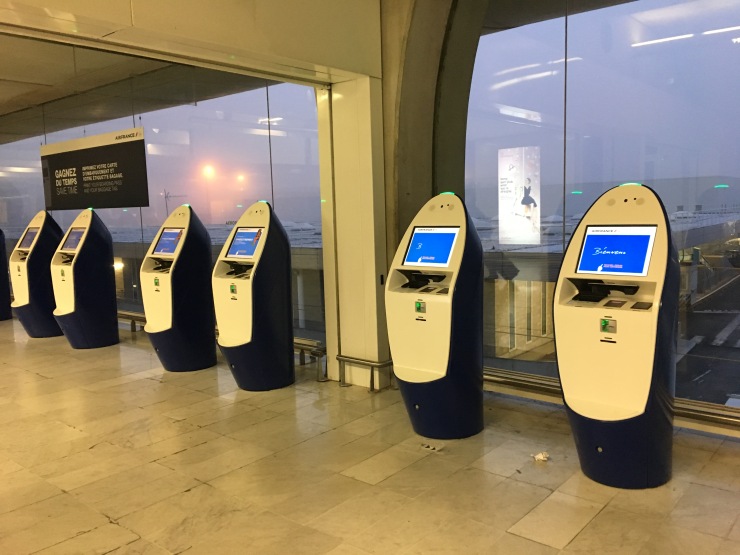 After approximately a 30 minutes journey from the city, I arrived at CDG’s Terminal 2, welcomed by these empty check in kiosks whilst on my way to the departures concourse. 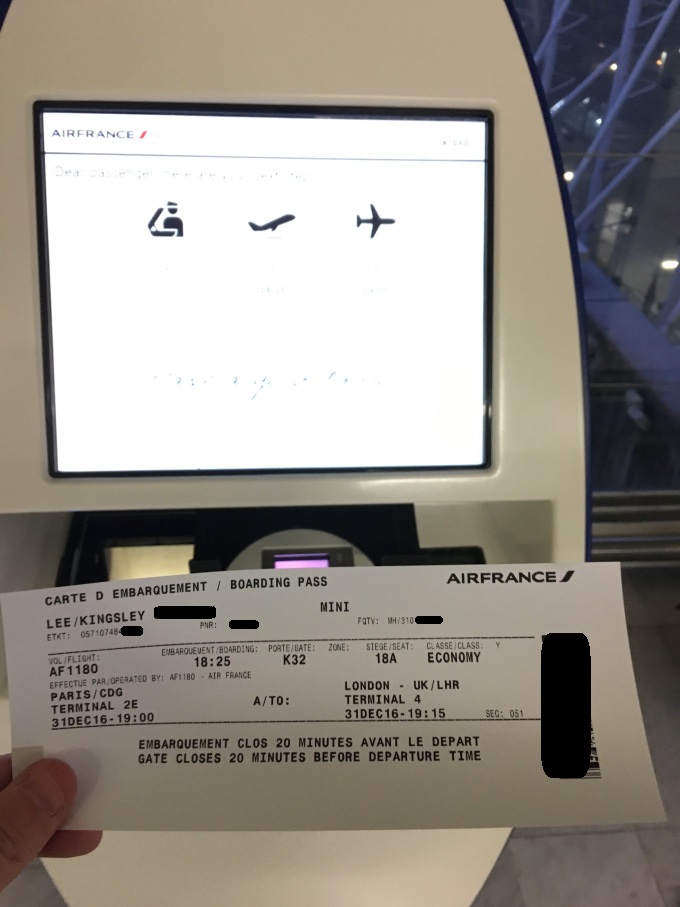 Got my boarding pass printed and headed to security clearance as I did not have any baggage to check it. Well technically I am not entitled to check in anything as I got the Economy Light fare which does not include checked in baggage.

The terminal seemed a little dim as illustrated above. Departures concourse was slightly packed with Asian passengers waiting to check in, which is explained by the various flights to Asia departing at night.

Passport control, queue was not too long. Cleared security and got my passport stamped in about 15 minutes. 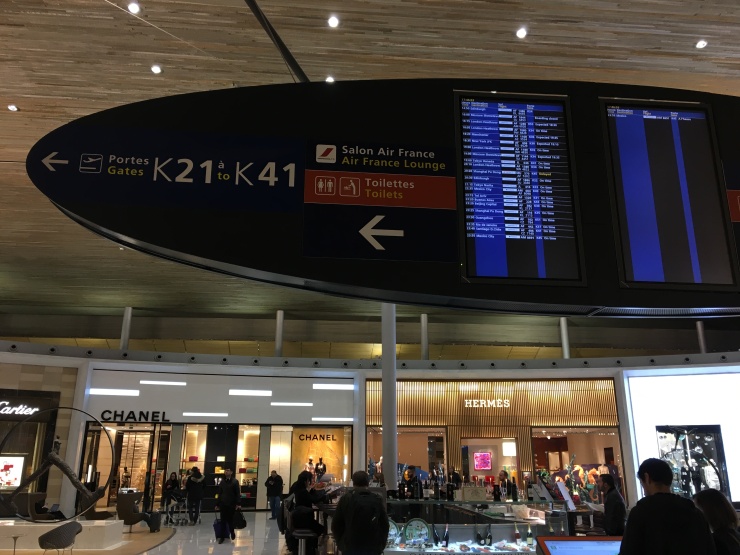 Everything seemed normal at this moment as I was looking for direction to my gate, K32. 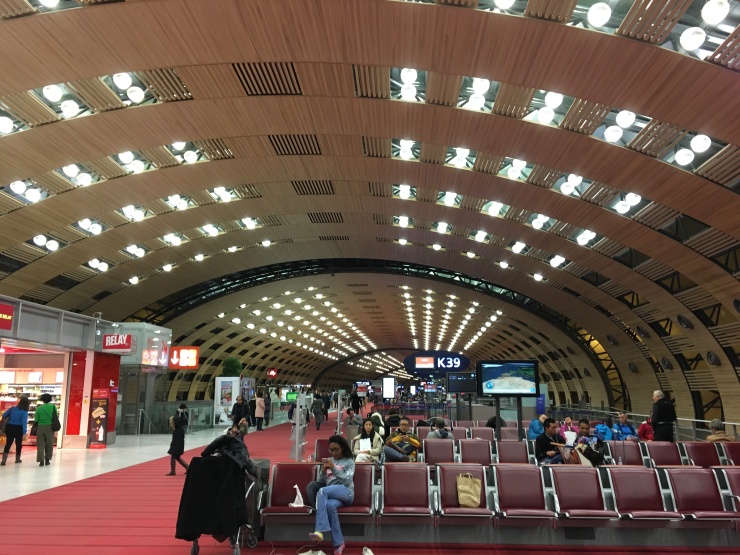 Upon reaching the area where my gate is supposed to be, checked the FIDS (Flight information display system) once more and poof, my flight disappeared from the board.
Perhaps David Blaine was somewhere in the airport that night?

As there was a customer service desk nearby, I joined the queue to enquire about the flight information not being displayed. To my horror, the desks were only manned by 1 staff which then left in an attempt to resolve a matter raised by the passenger who was in front of the queue (I suppose?). The rest of the passengers were left in the queue clueless on whether that staff will return and when will that be. I was getting a little anxious as it was fast approaching my STD and I still have no idea where my boarding gate will be.

Thankfully, another staff (pictured above) who passed by the counters noticed that no one was there and quickly helped to attend to those in the queue. Soon enough, I overhead that a couple of other passengers in the queue were on the same flight as I am and had the same question in mind. The PA system came to live then and it is announced that my flight has a gate change and it will now depart from Gate L23, which was fine until I found out from a ground staff that it is located at the other side of the terminal, which meant I had to take an aerotrain and pass through security again.

Here I am, clearing security once more. Felt so sad for a mother on the same flight as me who actually purchased some water earlier after clearing security for gates “K” and have to give it up now even though it was not her fault technically.

All the hurry was pointless as I arrived at my new boarding gate to find out that my flight has been delayed. Yes, you guessed it right, this is due to the fog. #whatthefog

My A319 featuring the blurry backdrop. 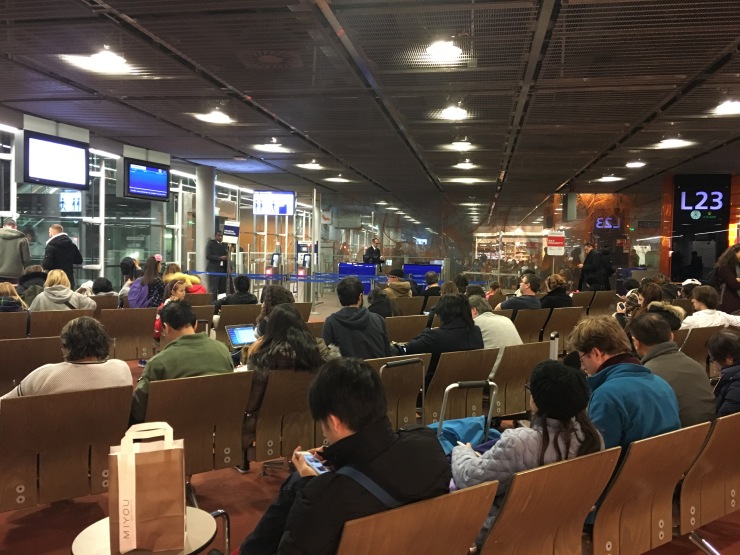 One complaint regarding the holding area for the boarding gates is that the amount of seats available does not really correspond to the passenger capacity (and my flight was only operated by an Airbus 319). Thus, 1 has to either stand or locate seats which are not directly close to their actual boarding gate.

Boarding was underway with no further delays and here is a glimpse of my equipment for the night.

As usual on an European narrow body, the business class seats are just like economy but with a blocked off middle seat. Not too attractive imo. 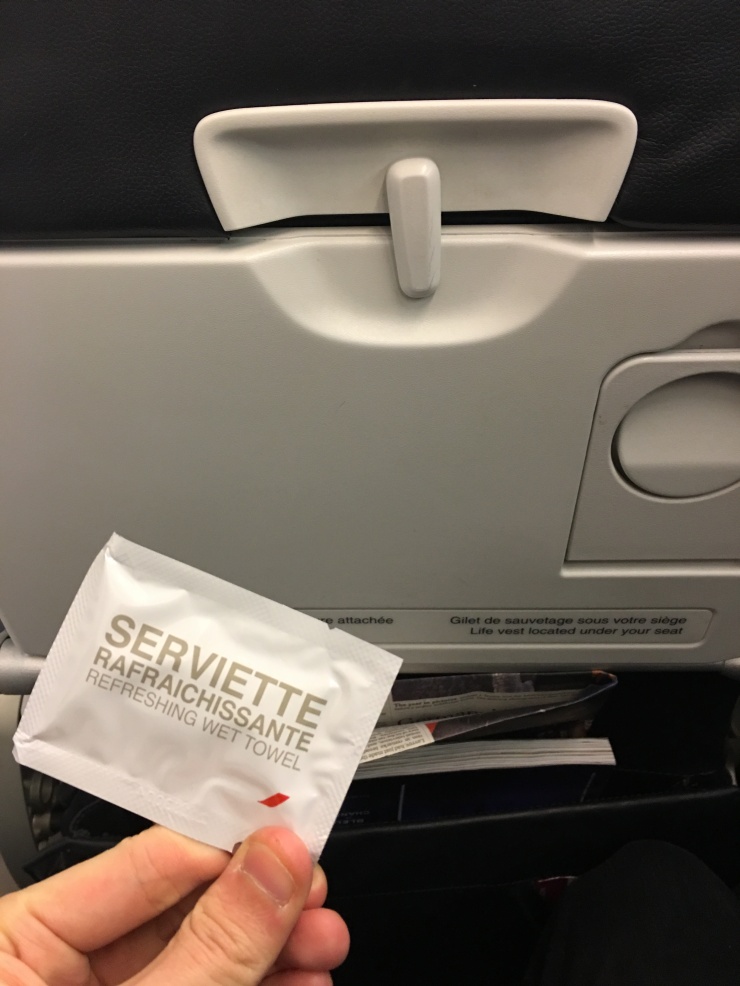 The fog seemed to have clear out slightly. 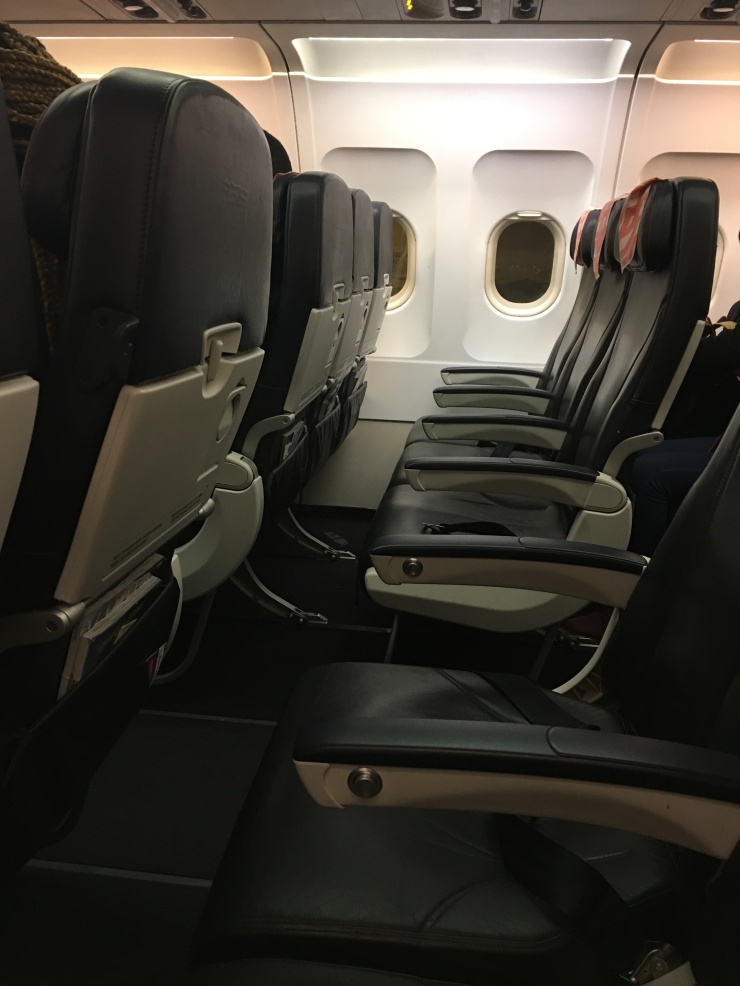 An impression of the seat pitch on this aircraft. 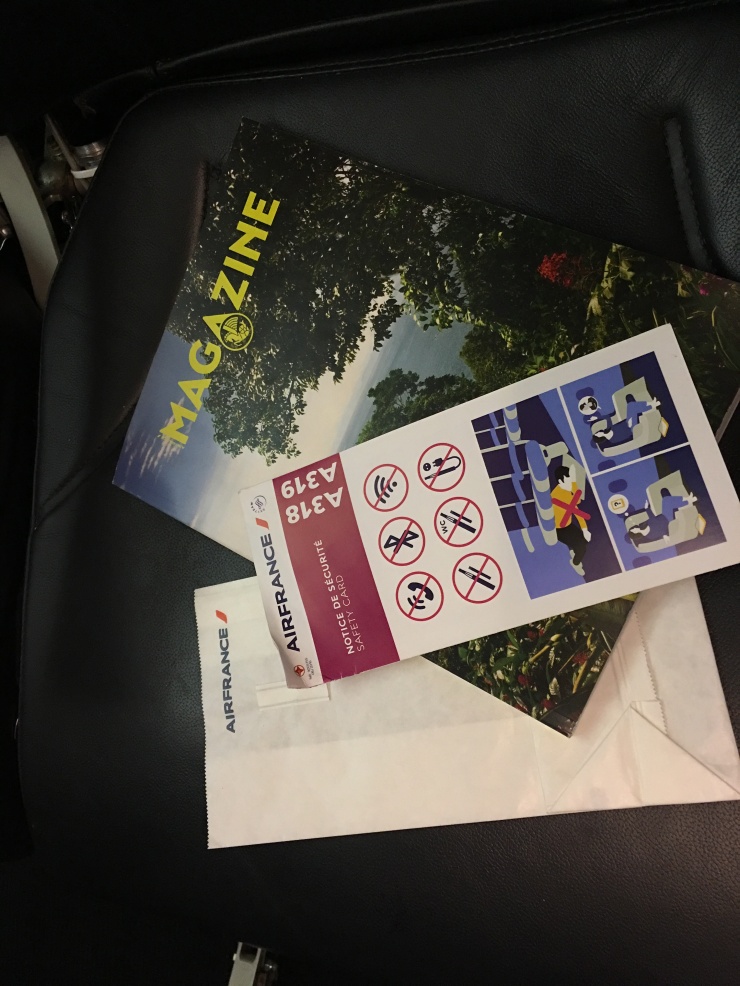 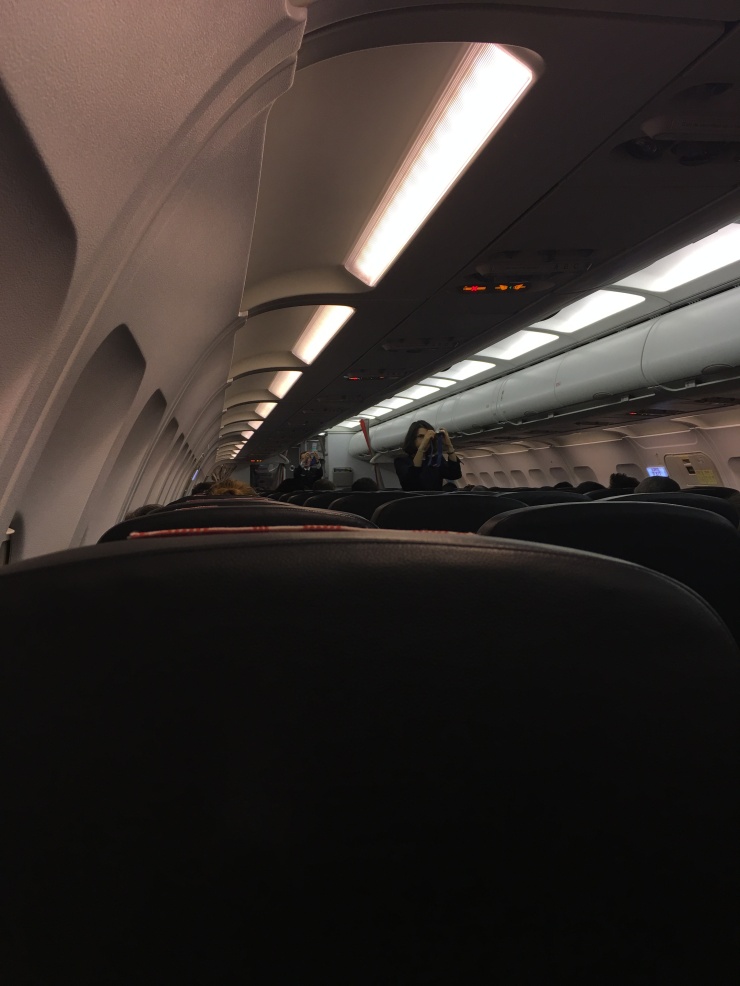 Safety demo was done manually by the crew.

A better look at the seat pitch. Not too bad for this short hop. 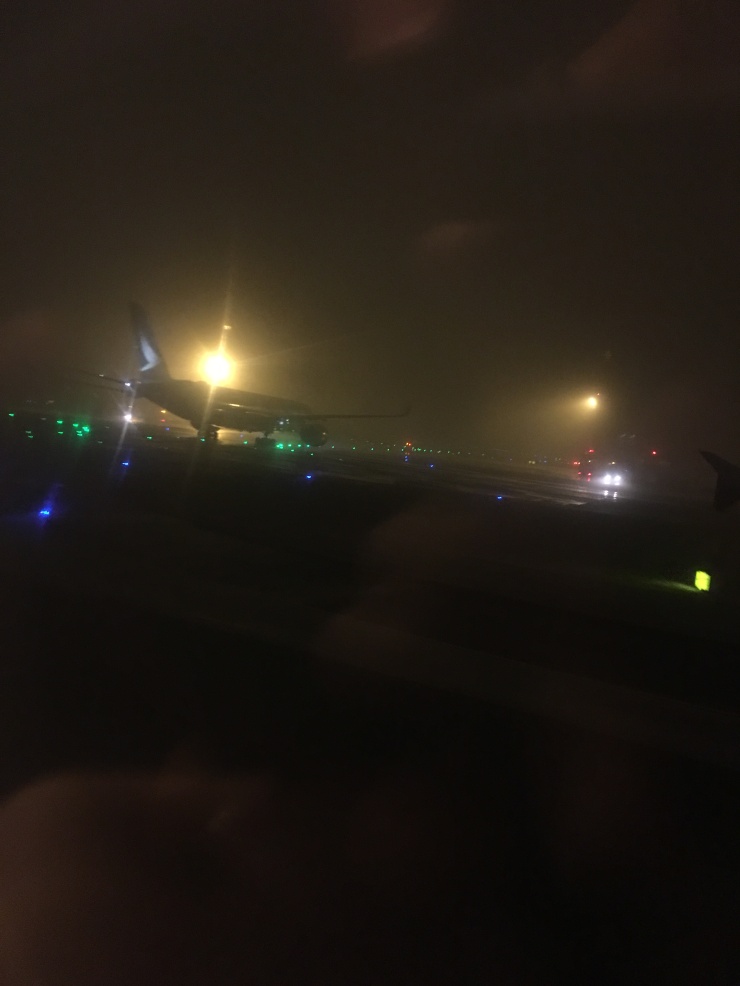 Captain announced that take off will be delayed slightly as we had to de-ice the plane before departing. Taxi to the deicing area took a while and spotted this CX bird in its new livery en-route. 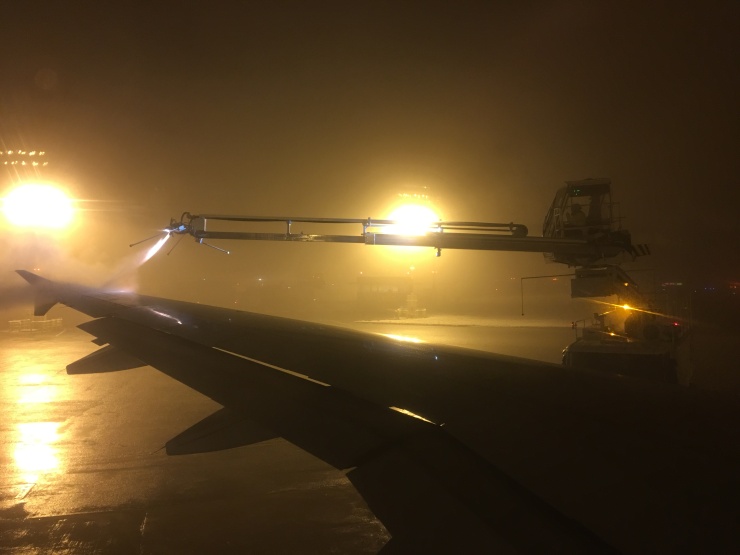 Quite an eye opener as I witnessed the entire process through my window seat. This is only my second experience having to deice before take off, the first was not fruitful as I had an aisle seat and saw nothing at all. The entire process took about 15-20 minutes if I remember correctly.

Fast forward to being airborne, snack and drinks were underway as soon as the seat belt sign went off, rather normal for this short sector (felt a little like the KUL-SIN vv. flights I have taken). The bread roll was offered and there were no other choice. Taste wise was acceptable but nothing spectacular. No complains though as it is complementary, contrary to the strategy BA is adopting at the moment.

Went for hot chocolate as my choice of drink. Perfect for the cold weather. 🙂

Before I even realized, the seat belt sign went back on shortly after meal service and soon after I have landed at Heathrow, just a few hours before the New Year’s celebration starts.

The change of gate which were rather last minute was indeed a bummer, given the trouble it takes to travel between the 2 gates, to add on with the lack of personnel available at the information desks, definitely not an ideal pre-flight experience. In terms of the hard product, it seemed decent for the short hop, nothing much to shout about. On to the soft product, catering was okay but the crew lacked enthusiasm and most of them came across lacking in terms of conversing in English. Overall, service was mediocre and there is a huge room for improvement, especially to the stewardess who just replied me with a ‘No, I do not have a pen’ and turned away when I asked to borrow one to fill in my immigration form for the UK border, without a single effort to seek help from other crew members onboard, which was totally unexpected. Oh well, a very memorable first time on Air France I would say…