This is by far my most eventful flight experience. What was originally my very first flight from London City Airport (LCY) eventually became my very first flight from Terminal 5 at London Heathrow (LHR) instead. Fast forward to the day of departure, I left my place about an hour and a half before my STD on FlyBe to London City Airport via DLR given that I live on the east side of London and LCY is conveniently a mere 15-20 minute journey away. It was an especially foggy morning and I was mentally preparing myself for a delay to my flight given the weather.

Proceeded to one of the many check in kiosks available upon arrival at City Airport to print my boarding pass given that I have already checked in online the day before my flight before meeting up with a friend from university whom I am travelling with. 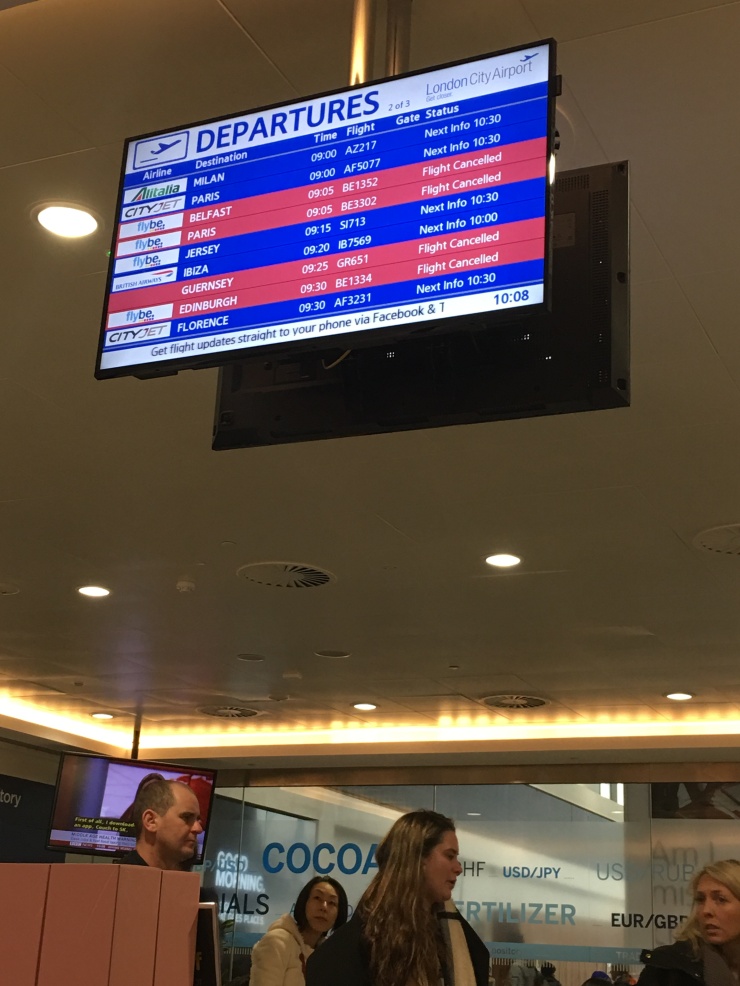 Upon clearing security, found out that my flight has been delayed and the next info will be available at 9.30am. At that moment, the terminal was buzzing as it was packed with travelers given that none of the scheduled flights were departing due to the low visibility and thick fog surrounding the airport. Soon, the flight display board started to show flight cancellations along with announcements on the PA relating to the cancelled flights. 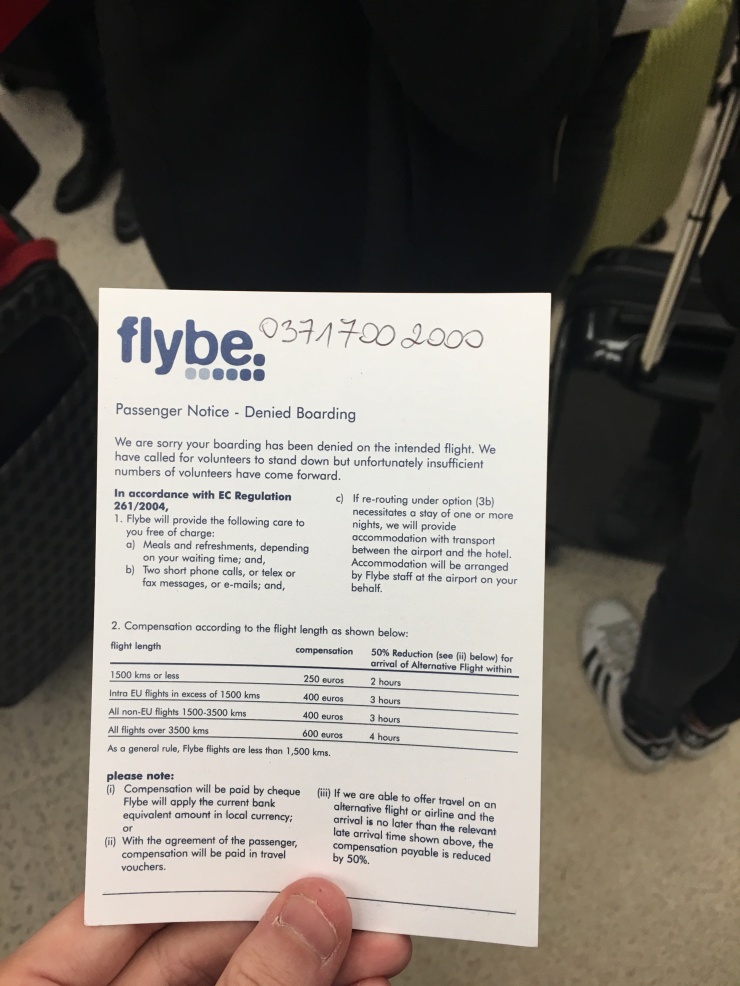 As you can probably tell my flight has been cancelled. It was unexpected from me as I was hoping that it will be purely a delay but it turned out that the fog was not going away for quite some time. What the fog, there goes my virgin flight cancellation. We were asked to proceed to the information counter and from there the ground agents redirected us to the check in counters to arrange for alternative flights. 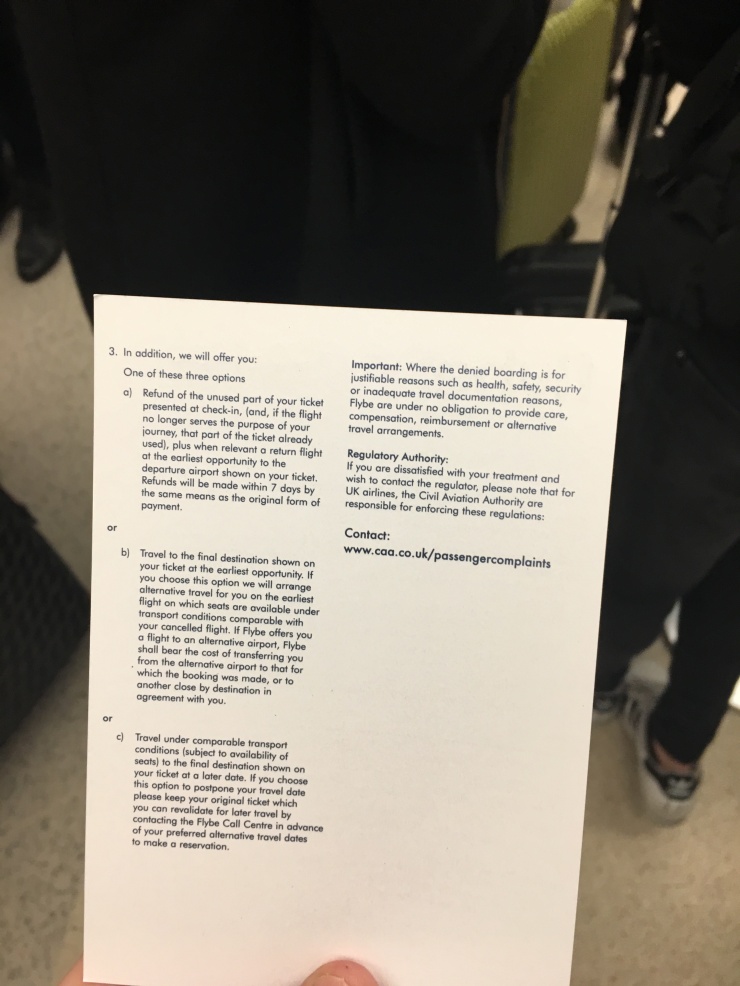 The above was given out whilst in the queue, which at a glance made me a little excited as I thought I will be eligible for the compensation per EC Regulation which turned out to be not the case as the cancellation was due to weather and not within FlyBe’s control. I only found out about this upon my request for the compensation after returning from Paris, which is annoying given that the passenger notice was not clear about this.

After the horrendous wait for almost 2 hours given that there were only 3 counters in operation handling all the cancelled FlyBe flights, I was greeted by this check in agent that seemed to be more annoyed than me as though it was her flight that was cancelled. Due to the slow process, the next earliest flight available is at 6pm to Paris CDG, however there is an option for Paris Orly on BA from LHR which is scheduled to depart at 4.40pm, which was what I went for despite the different airport. 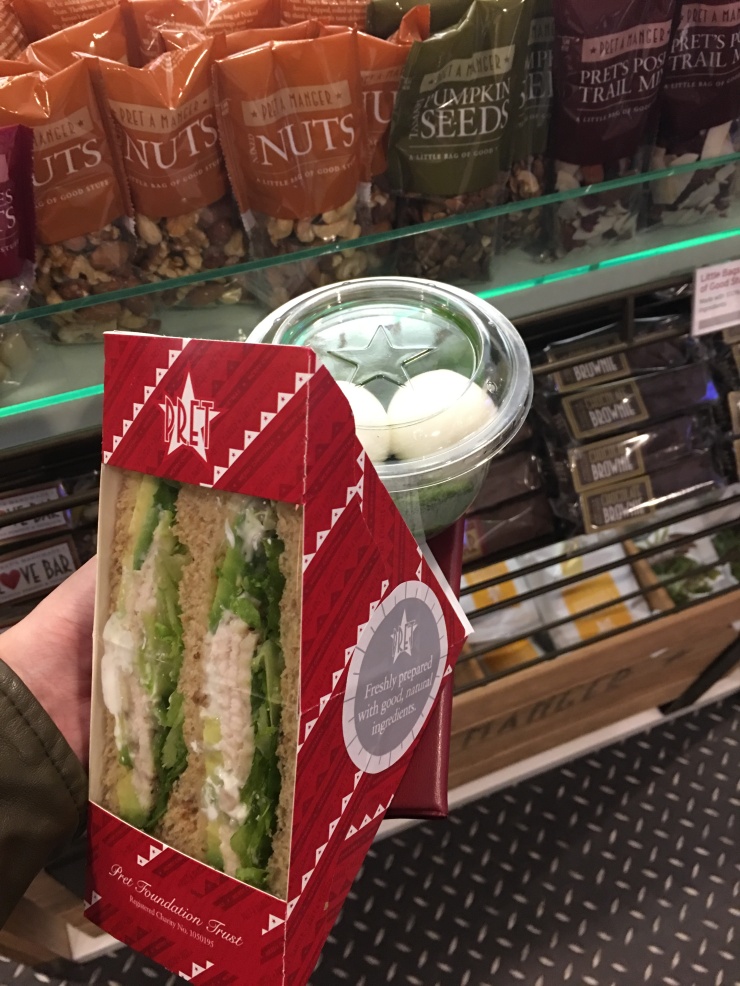 The food voucher as stated on the passenger notice was not offered until I asked for it, and the amount of only £5 per person is rather ridiculous for lunch and I was only able to use it in London City Airport itself. Got myself the above from Pret which is near to the check in counters before heading to the taxi stand with the escort of the check in agent to get a cab to Heathrow.

Rather interesting that I almost got sent to Terminal 4 instead as the ground agent was confused after sending several passengers which were rebooked on the Air France flight, in which I had to correct him as my flight to Orly departs from Terminal 5.

Some lovely sights of London en-route to London Heathrow, from the east of London all the way to the west.

Passed by Buckingham Palace as well.

After a journey of approximately an hour from LCY, arrived at the door step of Terminal 5 at Heathrow. Feels good to have this door to door transfer free of charge. 😛

As my boarding pass has been issued at City Airport, headed straight to security clearance. 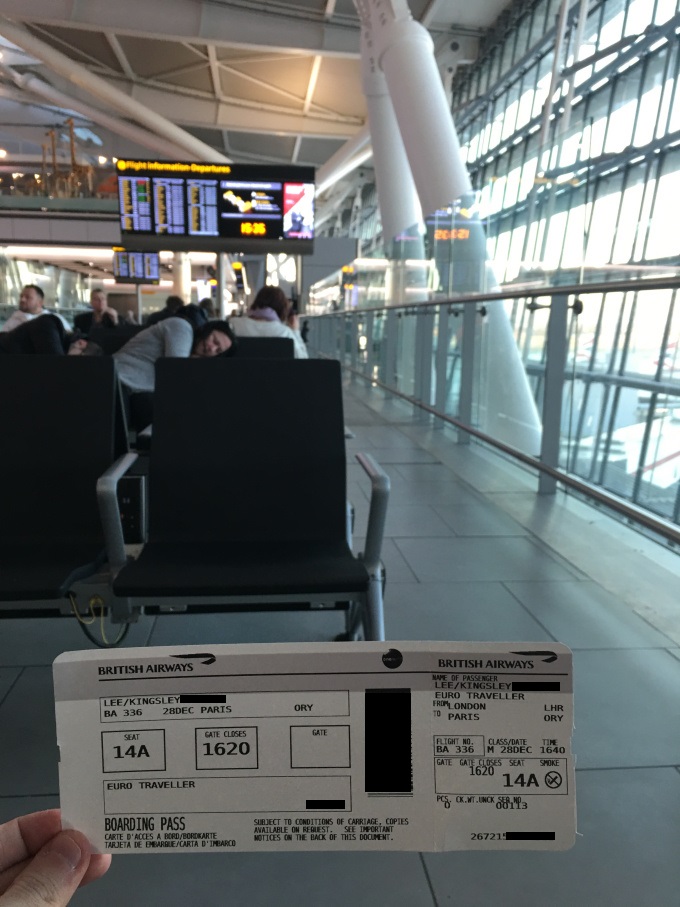 A rather unplanned final flight on BA for 2016.

Enjoyed the great view of the departures from the main holding lounge whilst waiting for my gate to be announced.

Gate for my flight to Paris seemed packed, no surprise given the many cancellations that morning at most London airports.

The new Airbus 320 on the right will be bringing me to Paris, and yes indeed it was a full flight and those with large carry on luggage were offered FOC check in at the gate. 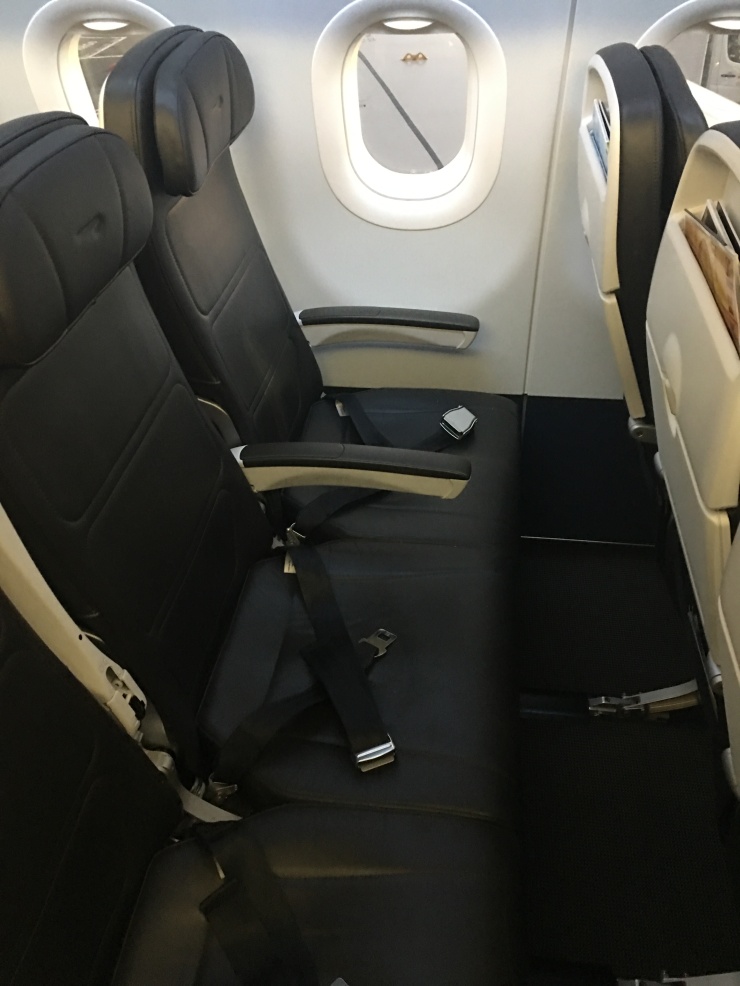 Row 14 where I will be taking the window seat. Love the new sleek looking seats. 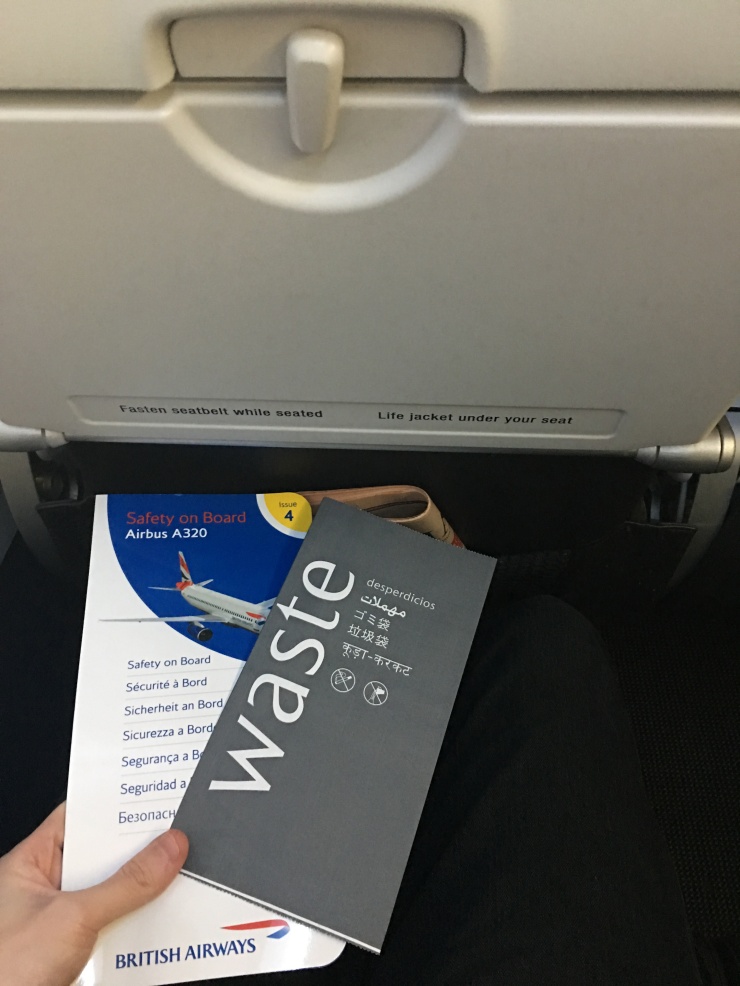 At one point I was surprised that there were no reading materials in the seat pocket, until I looked ahead and realized that the magazines are stored above the fold down tray table on these new seats onboard BA.

Safety demo was done via the drop down panels.

Push backed and the sun has set. Can’t believe I left my flat shortly after sunrise but I am still in London until this very moment.

Surprisingly there wasn’t really a queue for departures that evening at LHR and I was on my way to Paris finally (about 7 hours behind my planned scheduled time of departure in the morning). 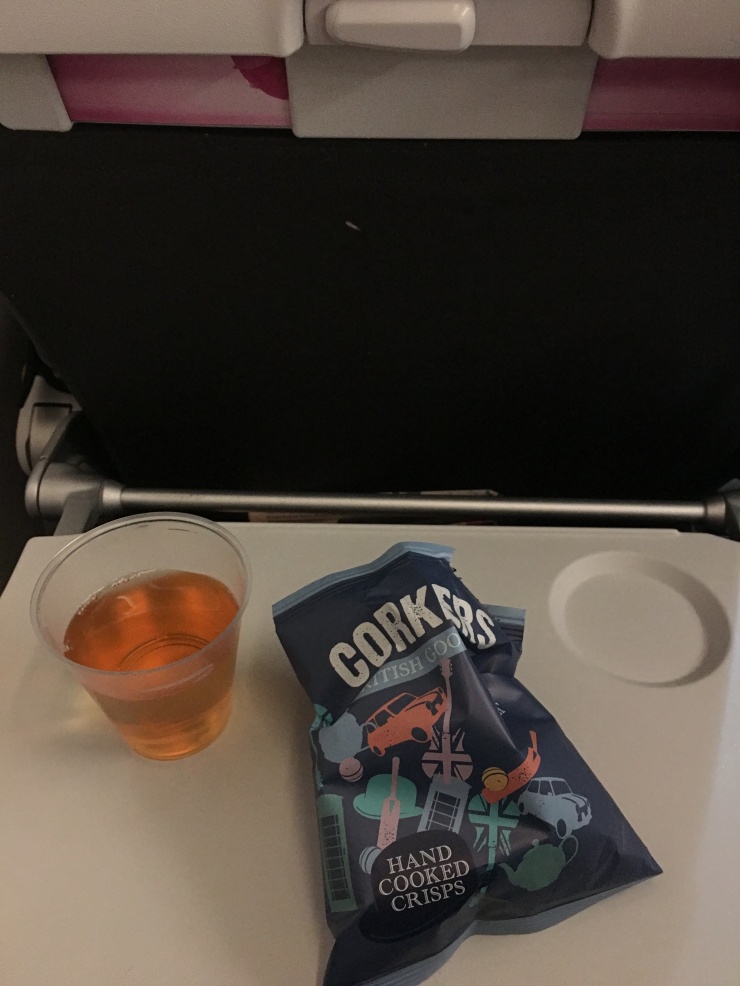 Crisps and drinks were offered and I got to enjoy my very last complementary food and drinks service before it is replaced by the M&S buy onboard early 2017.

The approach into Paris Orly was interesting as it is closer to the city and I got to see Eiffle Tower in all its glory at a distance. Arrived at ORY after an hour or so of flying,  and basically wasted day 1 of my 4 days trip in Paris. 😦

Passport control was a breeze and I got my Paris stamp in no time. Pictured above is the baggage claim area at ORY. First impression of this airport is that it seemed somewhat run down and perhaps that is why some parts are undergoing refurbishment. Feeling tired with the whole day of travel, my friend and I took the Orly Bus to the metro station and then headed to our hostel to drop off our luggage before heading out for dinner to conclude the eventful day 1 in Paris.

The flight on British Airways was uneventful, the new A320 is comfortable for the short flight, the service and the crew onboard were lovely as per my previous experiences. It is sad that BA is taking away the complementary food and drinks service on its short haul domestic and Europe flights, making it similar to a LCC. Personally I would only choose BA going forward if their price is on par to LCCs given that the offerings are now similar. In regards to FlyBe’s handling of its cancelled flight, there is a huge room for improvement from the lackluster ground agent handling the rebookings to the inefficient 3 counters handling the queue of passengers which were overflowing. Compared to how BA handled their cancelled flights at City Airport, it was so much more orderly and the queue at BA cleared so quickly. A note to myself in the future if my flight gets cancelled, book an alternative flight myself rather than waiting in the queue if it is long as I can just submit a claim for the expenses after that.